Agency for Prevention of Corruption does not publish materials for the Council’s sessions in advance, thus further disabling interested public to participate in this body’s work. The Agency did not publish the Third Quarterly Performance Report for 2018 nor the Proposal of the Rulebook on internal organisation and systematisation, which are to be discussed at the next session of the Council.

Third Quarterly Performance Report for 2018 and the Proposal of the Rulebook on internal organisation and systematisation of workplaces in the Agency are on the Agenda of the Council’s session scheduled for Tuesday, 30 October. Both documents could be interesting for the expert public to participate at the session and discuss these documents with the Council’s members. 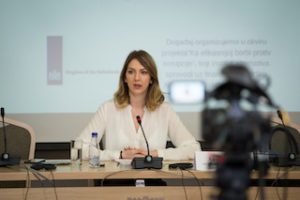 First document is important because the dissatisfaction with the Agency’s work and lack of its concrete results has reached Brussels and lead to very poor evaluation of this institution’s work in the latest European Commission’s country (EC) report for Montenegro from April 2018. Also, EC will soon issue its third non-paper on Chapters 23 and 24 which will also include the Agency and its work as one of the topics. This is why the Agency’s Quarterly Performance Report requires wider and open debate on its content.

Second document which the Council will have on its table on Tuesday also requires open and wider debate. Primarily, because the implementation of the Plan for optimisation of the number of employees in the public sector is ongoing, while the moratorium on public employment is in force until 1 July 2019. Additionally, in the Optimisation Plan, the Government has promised to let go about 3200 employees from the public service.

For all these reasons, the Proposal of the Rulebook on internal organisation and systematisation of work places in the Agency should be publicly available and a subject of the broader debate before the Council formally adopts it. Whether the proposed Rulebook is in line with the principles and objectives of the optimisation process could and should be particularly discussed.

Director of the Agency proposes the Rulebook on internal organisation and systematisation of workplaces, and the Council adopts it.

However, even such already limited and controlled participation is completely disabled by the Council’s practice not to publish materials for the sessions in advance, but only after adoption when it is no longer possible in any way to influence their content.

For all these reasons, the Agency’s Council should publish these and all the other materials for all its future sessions and thus allow the interested public to participate in the Council’s work and provide their expertise on the documents discussed and adopted by the Council.