In the eve of International Day for Universal Access to Information, 44 NGOs signed an open letter to the Prime Minister of Montenegro and the Minister of Public Administration, requesting that they abandon the proposed amendments to the Law on Free Access to Information that introduce new restrictions and drastically reduce the transparency of institutions, contrary to international standards. 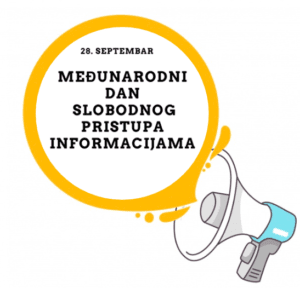 We demand that the Government and the Ministry of Public Administration abandon the proposed amendments to the Law on Free Access to Information, which introduce new restrictions and drastically reduce the transparency of institutions, contrary to international standards.

Instead of advancing the current law, the Government proposes worse solutions that undermine the fundamental right guaranteed by the Constitution of Montenegro and international conventions.

The proposed amendments introduce the so-called abuse of the right of access to information, and gives the institutions huge discretionary power to refuse to publish information of public importance without any criteria. According to the Draft, requests can be rejected because they are “unreasonable” or there are too many of them, or for any other reason when they are contrary to the aim and purpose of the law, which are not defined by any article.

In addition, the Government is also drastically narrowing the term information, again leaving it to the discretion of state authorities to arbitrarily assess whether or not an information is of public importance. This provision seriously undermines the complete system of access to information and is in direct contradiction with international standards, which clearly indicate that the right of access to information applies to all data held by institutions.

Also, the number of reporting entities of this law is decreasing, so the Government proposes that political parties that are predominantly financed from the state budget be exempted from the application of this law.

Bearing in mind the widespread political corruption, in the eve of the election year, such amendments to the law would make it impossible to control huge cash flows, and would further erode the already low trust of citizens in elections.

The amendments to the law completely exclude the intelligence and security sector, as well as any information that is shared with international bodies or third countries that the government decides is confidential. In this way, citizens are deprived of the opportunity to check before the court whether the information has been lawfully declared confidential.

In addition, it is envisaged that the right of access to information may also be denied when other laws provide that some information is secret. This decision is also contrary to international standards, which do not allow unlimited reasons for exceptions, but only those which are requested and necessary in democratic societies. The Council of Europe, whose member state is Montenegro, has a well-defined list of exceptions that is much narrower than the Government’s proposal.

Although the misuse of trade secrets that institutions refer to when hiding information of public importance is widespread, as indicated by the European Commission, the Government has not even attempted to define that term. In this area, too, there are clear international standards that the Government has failed to apply. Instead, it has left the institutions to interpret themselves what are trade secrets that are not prescribed by any current law. The draft reduces the obligation of institutions to proactively publish information online, although the Government’s official commitment is to make as much information available on websites as possible, in order to reduce the number of requests for information. If the Government adopts this decision, institutions will no longer have to publish public registers, expert opinions on laws, or data on additional incomes of public officials.

For all these reasons, we believe that the envisaged amendments are contrary to international standards and represent a direct threat to the work of civil society and the media, allowing huge space for corruption and illegal hiding of information of public importance.

We urge the Government to withdraw proposals from the Draft Amendments to the Law and, in full cooperation with experts, NGOs and the media, to define solutions that will enable the exercise of a fundamental human right to access information, in accordance with the Constitution and international conventions.

Below is a list of NGOs and representatives of Montenegrin media that have signed the open letter: