The phrase from the title of this text was employed recently by Miodrag Lekić, leader of Democratic Front, while trying to explain current relations in the ruling coalition. It might be that Lekic was right and that he objectively depicted relations between the major and minor partner in the ruling coalition. Yet, it seems that in Montenegro both the government and the opposition, in the widest sense, are marked by the balance of impotence.

The Government fails to improve the state and the society. Opposition fails to gain public trust by offering a realistic political platform. The balance of impotence.

The Government fails to deliberate itself from the rooted behavioral patterns (corruption, abuses, conflict of interests, politicized recruitment, poor selection of cadres). The Government fails to find new models for development of economy and it is trapped in the vicious circle of the wasted models with less means than it ever had at its disposal. The Government demonstrates inability to break with corruption and organized crime with more determination.

By choosing one key topic – fight against corruption and organized crime, opposition narrowed its space for maneuver. It flirts with nostalgia for the past system, with the need to regulate unjust regional and global spheres and woos to the demands for more money from the state budget. These demands, however, are harmful in the long term. Instead of creating new political, values’ and ideological platforms, which would be attractive for the widest domestic and international public, Democratic Front, the largest opposition formation, is becoming increasingly representative of its largest constituent – New Serbian Democracy. In the past seen as civic, modern and liberal, certain segments of the nowadays Democratic Front start to resemble more New Serbian Democracy than themselves.

It is the rule that within large political families larger constituents overweigh the smaller ones. Some views, opposite to the universal concept of human rights, are expressed within the opposition camp. Simultaneously, the opposition seeks support from the West, whose legacies sometimes criticizes.

The opposition also fails to make a breakthrough in the policy of Montenegro’s NATO integration. The ruling parties capitalized this issue, being awarded by the international reputation and support and stripping the opposition from equal chances in diplomatic relations with Washington and Brussels.

It seems that opposition started feeling comfortable while being in the “political wait room”, under the slogan “being here and being persistent is enough” – the regime will fall one day out of some reason anyway. It is not wonder then that the level of opposition activities decreased and that its ratings match its (in)activity. Given the available information from the parliamentary commissions in charge of electoral legislation, it might easily happen that the “business is done”, while maintaining systemic mistakes which allowed manipulation of elections. Precisely this issue will reveal whether the opposition truly wants and can ensure for election results not to be disputed any more.

It is not only that prime minister is tired. Years have left the trace. Both the opposition and the ruling elite, the pro-government and the opposition media, the majority of disinterested and the minority of critically-oriented NGOs, are not in a good shape. Things are largely reduced to another working day and obligation of repeating what has already been said for many times. Same people, same stances, same arguments. Information provoking reaction of audience are rare.

It is worrying that political reality show is getting more and more media coverage. Senseless and purposeless politicians’ quarrels, skirmishes and incidents, attacks and offenses, vote on irrelevant issues and fabricated issues, recycling, compilations. A lot of talk about politics in its ugliest edition, but little discussion about public policies which shape people’s lives. If there is a discussion about specific policies, it is reduced to the slogans of opposition and slogans of the ruling parties. We accept slogans as truth, depending on who says them. Even the media which are regarded as opposition went further than just publishing information and opinions negative for the Government – they persistently and often publish everything.

Journalists became dependent on politicians, NGOs and analysts. The independent work is decreasing. Research is also scarce. Several good, innovative and promising media initiatives faded out. Newspapers of one and of the other side started resembling each other. The situation is similar in civil society: the number of organizations is decreasing, the proactive approach lacks, and organizations increasingly accept previously set conditions and the role of “implementor”. 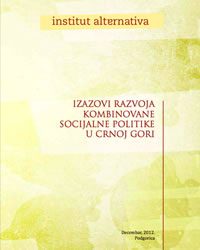 At its last session, the Government has verified the Report of the Commission for allocation of revenue from gambling on expenditure of funds awarded by the Decision on allocation of revenue from gambling for 2011 to the organizations whose projects were under audit. Selected audit company conducted financial monitoring of all plans and programs of organisations which have been allocated more than 30 000 euro. Audit and monitoring also included the projects of 18 organisations that have been awarded projects worth less than 30 000 euro.

Among audited projects was also the project of the IA entitled “Challenges of developing the welfare mix in Montenegro”, in the amount of 11 350 euro. Audit confirmed that IA’s project was conducted in compliance with the contract signed between the Commission and IA and that all funds were spent as it was provided by the projects budget, in accordance with the contract obligations and the law.

IA is a member of NGO coalition “Through Cooperation Towards the Goal”, a self-regulatory body, and has provided all relevant information about its financial management in accordance with the NGOs Code of Conduct, of which IA is a signatory. All our financial reports of are publicaly available here. 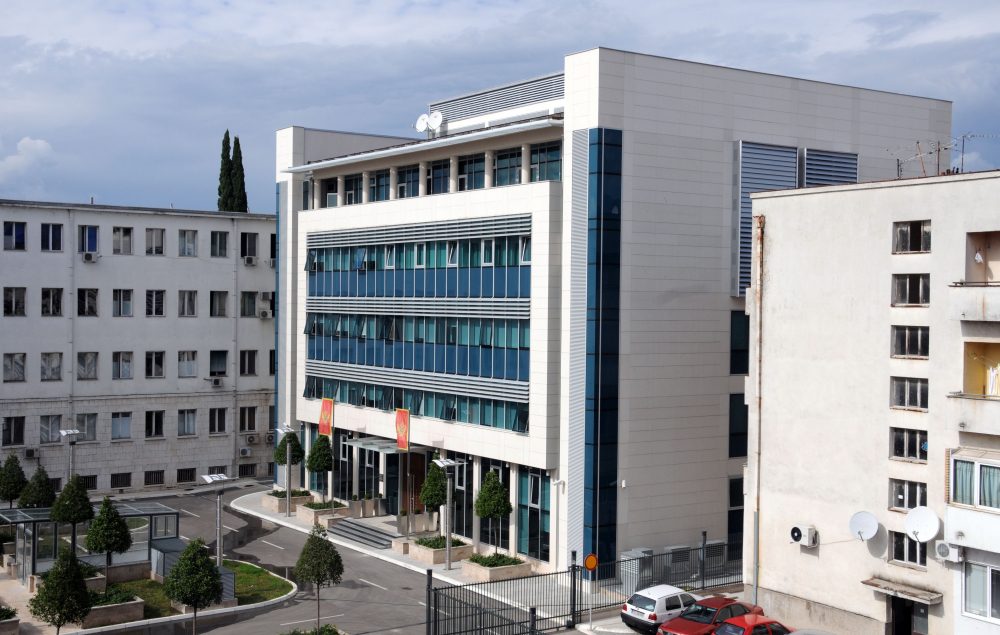 Ministry of Agriculture and Rural Development, Ministry for Human and Minority Rights, Ministry of Foreign Affairs and European Integration, Ministry of Defense, Ministry for Information Society and Telecommunications, Ministry of Interior Affairs, Agency for Environmental Protection, State Archives, Bureau for Intellectual Property, Bureau for Education, Legislative Secretariat, Agency for Tobacco, Tax Administration, Human Resources Management Authority, and Directorate For Anti-Corruption Initiative published the names and surnames of their employees at their websites.

Small number of authorities which ensured the public insight into this information demonstrate the disrespect for provisions of the Law on Free Access to Information, which entered into force in February this year.

Article 12 of this Law prescribes, among other things, that the state authority is required to publish at its web page the list of civil servants and state employees with their titles.

Consistent implementation of these legal solutions would significantly improve the work of state institutions.

It would also enhance the professionalization of state administration, by ensuring the easier monitoring of the implementation of the Law on Civil Servants and State Employees, which is expected to put an end to the politicization and nepotism during the recruitment and promotion in state authorities.

In other words, if the state authorities regularly updated the lists of its employees, it would be easier to obtain the information about filling the vacancies in state authorities and about the number of civil servants and state employees.

The IA thus urges all the state authorities to fulfill their obligations and regularly update the lists of its employees.

Plan for the reorganization of public administration, although adopted at the Government’s session on July 18, is sill not published at the Internet, which is opposite to the Government’s decision on publishing its materials and undermines transparency of its work.

The proposal of the report on progress Montenegro achieved in the period between April 25 and July 1, prepared by the Ministry for Foreign Affairs and European Integration for the European Commission, states that the Government adopted Plan for the reorganization of public administration on July 18 this year.

The document, however, cannot be found among the materials from the session held on that date, which were subsequently uploaded onto the Government’s website.

We thus call on the Government to ensure the public insight into the aforementioned plan, which lays foundations for comprehensive public administration reform in the country.

The mere fact that one third of Montenegro’s employees works in public sector makes the need for publishing this document more urgent.

So far, only the 2012 draft plan for reorganization of public sector, which envisaged drastic cuts of employees in public administration bodies, is publicly available.

The Bill on Budget and Fiscal Responsibility contains numerous ambiguities and shortcomings which need to be addressed through amendment procedure in the Parliament. Among other things, increasing transparency of the budget cycle and enabling more significant participation of the Parliament in this process was not achieved; offense liability is still vaguely defined; whereas autonomy of independent control institutions threatens to be undermined.

Institute Alternative submitted its comments to the Ministry of Finance during the public hearing, but the law drafters did not show understanding for our main suggestions.

The Bill on Budget and Fiscal Responsibility does not amend the budget calendar. Consequently, this means that the Parliament is left with the deadlines unacceptable for proper consideration of the key budget documents. MPs must not adopt the Bill which once again leaves the Parliament with less than a month for adoption of the budget bill. Furthermore, it does not impose obligation on the Ministry of Finance to report on budget execution throughout the year, while at the same time provides for the MPs to discuss the Final Account of the Budget for 2013 in October 2014. In addition, the Parliament remains excluded from the budget preparation process. This means that MPs will not be consulted during budget drafting process or be able to influence the content of important provisions of the annual budget, capital budget or the Strategy of Debt Management.

When it comes to offense liability, it is quite likely for the offenses committed to go unpunished, since the statute of limitations will probably expire until these offenses are discovered or while the transfer of responsibility for initiating criminal proceedings is shifted from one institution to another. The law drafters persistently refuse to stipulate a provision in the law entailing three-year statute of limitations for initiating and conducting criminal proceedings, which is the longest possible timeframe allowed by the Criminal Procedure Code. On the other hand, it is not clear whether the State Audit Institution, as the only institution that has so far revealed violations of The Budget Law, will be able to request initiation of criminal proceedings.

An opportunity for this new legislation to ensure financial autonomy of authorities and institutions whose main responsibility is to monitor the work of the Executive, primarily the State Audit Institution, the Protector of Human Rights and Freedoms, and the Agency for Protection of Personal Data and Free Access to Information, was not taken advantage of. Not only that the independence from the Executive of aforementioned authorities was not strengthened, but their position was leveled with any other consumer unit, providing that, under certain conditions, the Ministry of Finance has the power to temporarily suspend the use of budget funds for these authorities.

Finally, it is not clear why the Bill explanation stipulates that it is not necessary to provide funds from the budget for its implementation, although the Law provides for the establishment of the new budget inspection. MPs need to pay closer attention to these kinds of details in the process of consideration of the bill, because these details indicate the way law drafter understands the authorities whose establishment it suggests.

The Budget Bill is one of the most important legal documents the Parliament will rule on until the end of this year. Therefore, MPs need to pay close attention to it. It must not be permitted for ambiguous provisions to be adopted; the autonomy of important monitoring institutions needs to be protected; while the budget calendar finally needs to be amended in order for it to allow effective parliamentary control of the budget.