Skip to content
Institute Alternative » Public administration » Reforms in Rule of Law Area: What Is Yet To Be Done

Answers of our Dina Bajramspahić to DN ”Vijesti” questions regarding: current situation in judiciary, difficulties to reach an agreement and achieve qualified majority, announced voluntary resignations of the heads of the judiciary, blockade of the Judicial Council and Constitutional Court. 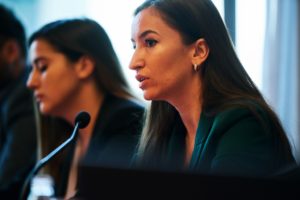 First of all, let me just say that the announcements of the resignations of certain officials in the judicatory are good news. It is best shown by the stagnation within negotiations that we have reached satiation in judiciary, as well as lack of ideas and lack of energy to pull the processes forward. There was no reaction from Judicial and Prosecutorial Council to the fact that, in the Report of the European Commission, chapter 23 was assessed notably worse than chapter 24, which concerns organised crime.

I believe that this transitional period should be used by all os those who are, in any way, compromised – to resign, whether it’s about outrageous legal interpretation that two and three are same, or it is about even more serious violation of ethic, laws and doing harm to justice. That would be an important contribution to change for the better.

I don’t think the vacuum, that would be created by resignations of staff from judiciary, would cause any major disruptions, because for several years the judiciary is in acting positions state. Decisions made by two Judicial Councils have questionable legitimacy, as well as decisions of the Constitutional Court. The resignations of judges and prosecutors can lead to a backlog of cases, but that is something we know pretty familiar with and maybe what is needed for a long term recovery.

The problems in judiciary arising from a number of paradoxes are not easy to solve. First of all, the system is small and closed, which derogates the quality of the work. In closed systems, colleagues learn from each other and thus acquire some wrong practices. That is why we need new, open-minded people who will question these habits, re-examine them, change them. That will bring more courage and integrity to the work, which is lacking because for a long time because the system was under strict control and discipline was nurtured as the main value and key for getting promoted.

However, the problem is that even being so small, this system is much bigger than it should be, and Montenegro already has a much larger number of judges per capita than what is European standard. The new Government should know that the rationalisation of the judiciary is also their obligation, on which chapter 23 depends because of the benchmarks. Rationalisation should be seen as an opportunity for the best ones in the judiciary to stay, according objective, precise and professional criteria and evaluation of professional performance.

Outflow of judges and prosecutors will create the possibility for these systems to gradually change and improve. Instead of accumulating of judges, according to European standards, there should be more advisors and associates, experts, interns, developers of IT technology to support the judiciary, those who will modernise processes, speed up the procedures and invest in infrastructure projects so that there can be more trails at the same time.

I think that the new Government will make mistake if it rushes and tries to solve the problems in the judiciary with big moves and ad hoc twists. High-ranking judges cannot be produced overnight, because that would mean that political staff can be easily “infiltrated” into the system. The problems in the judiciary will not be solved by simply removing some people who are close to some politics, and appointing by those closer to the opposite politics. The new Government faces the risk of replacing staff close to the leaving Government, with staff close to itself. If that happens, a serious chance of creating an independent judiciary would be wasted. It must be ensured, when one day, the new Judicial and Prosecutorial Council are completed, there is no impression that they are under the political influence of the new ruling elite.

This is why we have defended challenging constitutional solutions during all these years, because they are preventing arbitrariness and unilateralism of anyone. It would be insane for each new government, every four years, to form and disband the entire judicial system. That is why even today we believe that two-thirds majority is the only way to force every government to be serious and force it to suggest good staff solutions that is acceptable to wider groups of citizens representatives. Agreement is the key to professionalisation. Judicial reform must overcome any political power. We must realistically perceive that even the change of government will not quickly and easily cure political elite from particracy habits and needs to reward their officials with high positions. Therefore, the Constitution forces them to propose to the Parliament names that they have nothing to complain about.

And here we come to another important thing – the implementation of the Constitution. Everything else is frivolous. What kind of country does not respect its own Constitution? It is not a legal, but rather the question of political culture. Public pressure must be created on the new opposition not to be stubborn, but to unblock the judiciary in the public interest. This is the general public interest and it is very important for every citizen, including their supporters. I think that level of maturity is necessary and possible. All MPs, both parliamentary majorities and parliamentary minorities are paid with citizens money to solve these problems and should be constantly held accountable. Judiciary is not just governments problem, but a social problem of public importance, a burning issue and all parties must make an effort to solve it.

The new government needs to establish a dialogue in the Parliament regarding these topics as soon as possible, to create a platform, offer competent people and to create environment in which it will be very uncomfortable to keep Montenegro blocked in the negotiation process.

If the insisting on Constitution was stoped (although there is no chance for that in this mandate of the Parliament), human resources management in the judiciary would also turn into prey apportionment – which is unacceptable.

Finally, we should recall that all laws about the judiciary were created under the strict control of the European and Venice Commission and have largely received support. Based on application of these laws, Montenegro received temporary benchmark for chapters 23 and 24. Judiciary did not come to a dead-end due the bad legal solutions, but because good laws are not applied. New people in the judiciary will have responsibility to apply them, especially in the area of selection and promotion of judges and prosecutors, accountability (ethical, disciplinary, criminal), evaluation, etc. These are also temporary benchmarks that is monitored by the European Commission with great attention.

This text was published on 22 October 2020 in Daily News Vijesti.