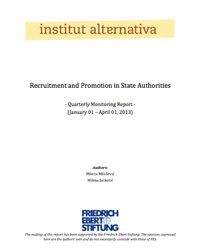 Key findings of the report:

Start of the implementation of the new Law on Civil Servants and State Employees (LSCEE) was marked by the failure of authorities to meet all the legal and institutional preconditions for successful application of this act. Only four of thirteen envisaged by-laws were adopted during the 17 months long transition period, which marks the time between entering into force of the Law and launching of its implementation. Between January 1, 2013 and April 1, 2013, which is a period covered by our first quarterly report on the recruitment and promotion in state bodies, only three additional necessary by-laws were brought.

By April 1, the Rulebook on content and manner of keeping the Central Human Resources Record has not been adopted, although this record is a main precondition of the successful human resources management in the state administration. Data about near seven thousand of state administration’s employees have not been submitted to this information system yet, although it should contain the basic information about all civil servants and state employees in Montenegro. In general, capacities of Human Resources Management Authority, which is in charge of keeping the Central Human Resources Record, are not satisfactory, especially with respect to the training of staff to implement new procedures testing candidates’ abilities to perform tasks of the state administration job.

During the first three months of the implementation of the LSCEE, a total number of 18 vacancies for state administration jobs were announced. However, apart from the selection of heads of state administration bodies, only four candidates have gone through the newly regulated procedures of testing and evaluating candidates’ abilities, following the two separate vacancy notices. Since in both cases the final ranking list consisted of only one candidate, who subsequently got the job, it is too early to bring conclusions about the extent to which the new Law encouraged establishment of the merit based system in state administration. More precisely, it is to early to determine consistency of the application of the new general rule that the candidates with the highest ranking should be given a job position .

Yet, findings indicate that the implementation of the LSCEE lacks transparency. One body rejected to state the name and surname of the selected candidate, under the excuse of protecting his or hers personal data, although the Law on Free access to Information envisages obligation of all bodies to publish the list of its servants and employees, along with their positions. Furthermore, the competence of conducting internal notices within the state body was assigned to the state body itself, contrary to legal provisions which gave the Human Resources Management Authority a central role in conducting all the vacancy advertisements and notices.

With an aim of enhancing recruitment and promotion in state administration, it is thus necessary to finalize the legal framework for application of the new rules. Human Resources Management Authority and state bodies should ensure the consistent implementation of the provisions which clearly regulate the competences for conducting the vacancy notices and advertisements. All state bodies should regularly update and publish on their websites the lists of all their servants and employees along with their job positions, and thus ensure the transparency and easier monitoring of recruitment and promotion in state administration.