Skip to content
Institute Alternative » Security and defense » Reaction: Announced amandments to the Law on public assemblies would be a setback of civil liberties 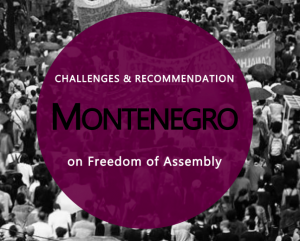 Following the Minister of Interior announcement that he will initiate amendments to the Law on public assemblies and public performances, in order to ban the protests on city roads, Institute Alternative warns that such legal provision would be a step backwards in relation to existing law. Additionally, it would represent step backwards from the European and international standards governing this area.

The Government has to take into consideration that, apart from freedom of movement, which is, in Minister’s word, endangered, freedom of assembly also constitutional right which cannot be limited in this manner.

Last year, Institute Alternative warned of the weaknesses of the Law on public assembly and public performances, recommending to delete provisions which ban the gatherings at specific locations. We remind that, according to the Constitution of Montenegro, public assembly can be only temporarily prohibited only in order to prevent disorder or execution of criminal offence, threat to health, morality or security of people and property. Although the Constitution of Montenegro regulates this area in accordance with international democratic practices, the Law on public assemblies and public performances, the Law limits this freedom in terms which are not recognized by the Constitution, introducing permanent prohibition of assemblies in locations listed in the Law.

The Minister is right saying that the right to assembly is not absolute, but this claim should be supplemented by the standards set by international authorities in this area, Venice Commission and OSCE, which recommend to eliminate blanket prohibitions regarding the assembly locations. Public assembly could be banned only in situations of high safety risks. Even then, the Police has to proactively work on eliminating risks so as to enable citizens to exercise their right to peaceful assembly and protection, which is also the advice of the UN Human Right Committee.

We urge the Ministry of Interior to improve the law in force and align it with international standards, rather than taking a step backwards which would limit citizens’ constitutional rights to send a message to decision-makers in the country by gathering peacefully.

Study: Freedom of Assembly in Montenegro