Skip to content
Institute Alternative » Accountable public finances » Press release: the European Commission report on corruption at the local level is being concealed 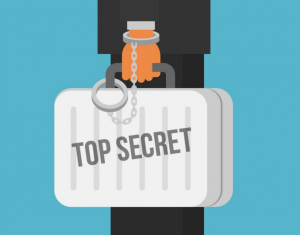 The Ministry of Foreign Affairs and European Integration (hereinafter: MFAEI) rejected the request for free access to information submitted by Institute Alternative (hereinafter: IA) thus preventing our access to the data on corruption at the local level prepared by experts of the European Union. The practice of concealing important information negatively affects public confidence in the institutions of the system which is already on the “shaky ground” and also unfavorably influences the overall activity in the area of fight against corruption.

Additionally, the decision of the Ministry by which this report was marked with the designation “restricted” represents a continuation of the practice of intransparency of the negotiation process and is not in accordance with the guidelines of the European Commission. As a response to the request for free access to information, the MFAEI informed us in August 2015 that the European Commission shall decide separately on each case whether or not the report should be made available. This interpretation by the Commission also affects the transparency of the process, but it is essentially different from the MFAEI’s response. Thus, not all reports are classified and under the designation “restricted”, but the European Commission reserves the right to decide on the availability of each report individually. By deciding independently on the report, the MFAEI brings additional attention to the content on the report, as well as to the pervasive corruption in Montenegrin municipalities.

IA once again underlines the importance of transparency in the negotiation 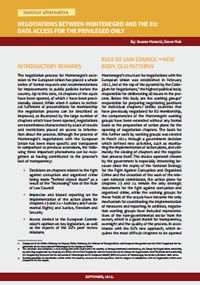 process, in order to enable reaching best possible solutions and improving current practices within a highly participatory and open process. In addition, it is particularly problematic that access to the report was not granted to the stakeholders who participated in the meetings with experts of the European Union, as was the case with IA during the visit on corruption at the local level. We bring your attention to our analysis dealing with this problem which was published in September 2015 under the title “Negotiations between Montenegro and the EU: Data access for the privileged only”.

The European Commission and the Ministry of Foreign Affairs and European Integration should make available all reports drawn upon within expert missions, whereas personal data and information on ongoing investigations should be redacted. Otherwise, we will continue to ask ourselves: What does it say in the reports of expert missions which makes them classified and under the designation “restricted”?

Read also: The Government hides the data while Marković hides the truth