It’s not true that there is no interest of NGOs for obtaining full information about the results of Montenegro in the field of the rule of law. On the opposite, our interest is continuously present, but the Government’s responses don’t exist, they are imprecise or secret. 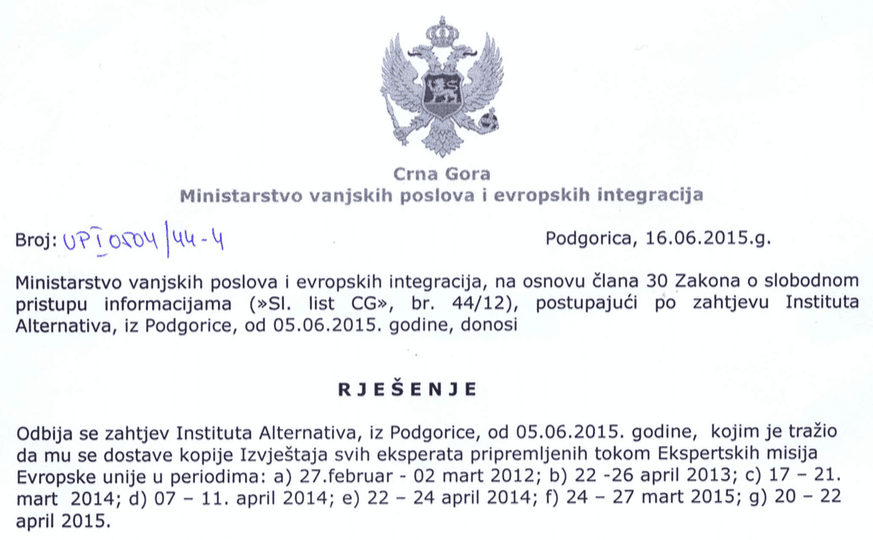 That’s why we can claim that Duško Marković, the Vice president of the Government hasn’t told the truth during the TV show “Živa istina”, that aired on June 26th. While talking about alleged successes in the field of the Rule of law, stating certain data from the domain of the judiciary statistics, Marković replied to the journalist’ question claiming that NGOs don’t want to take those data and to deal with them.

On the contrary, Institute alternative has at least three reasons to claim that these statements are not true.

Firstly, the Peer Review reports made by EU experts for seven fields during current and last two years, have been classified with the designation of confidentiality, as claimed from the Ministry of Foreign Affairs and European Integration in their official response delivered to us on June 16th. The Ministry has classified these reports with the designation “restricted”, but without giving any reason why they did so. The fields analyzed by the European Commission experts are rule of law, conflict of interest, money laundering and financing of terrorism, efficiency of judiciary and fight against corruption and organized crime.

Second of all, for two years in a row the Government doesn’t want to make European Commission’s opinions on some important law proposals and laws drafts, which are being adopted in the available to the public, NGOs, and not even to MPs. One of examples is the Commission’s opinion on the Proposal Law on the public procurement, which we have asked for multiple times through requests to the free access to the information, but without any success.

Finally, the members of the Working group for the Chapter 23 have very limited access to the information about realization of the measures from the Action plan for the aforementioned Chapter, as well as about the communication between the Government and the European Commission. Additionally, NGOs and all citizens are excluded from the Rule of Law Council’s sessions which are led by none other but Duško Marković.

Therefore, we invite the President of the Rule of Law Council to open the session of this governmental body to the public, and we invite the Ministry of Foreign Affairs and European Integration to make information, which are crucial for the fight against the corruption and organized crime, publicly available. Otherwise, we will legitimately keep asking the question: What is hiding in the document of the EU experts that made Government classify them as “restricted”.

Here you can find the transcript of the statement of Duško Marković, Vice president of the Government, in TV show “Živa istina”, aired on June 26th.