Two municipalities in Montenegro, Budva and Plav, have not yet adopted the Final Account of the Budget for 2012. It is time that the Government and the Ministry of Finance undertake measures to compel them to comply with the law and basic standards of transparency and accountability. 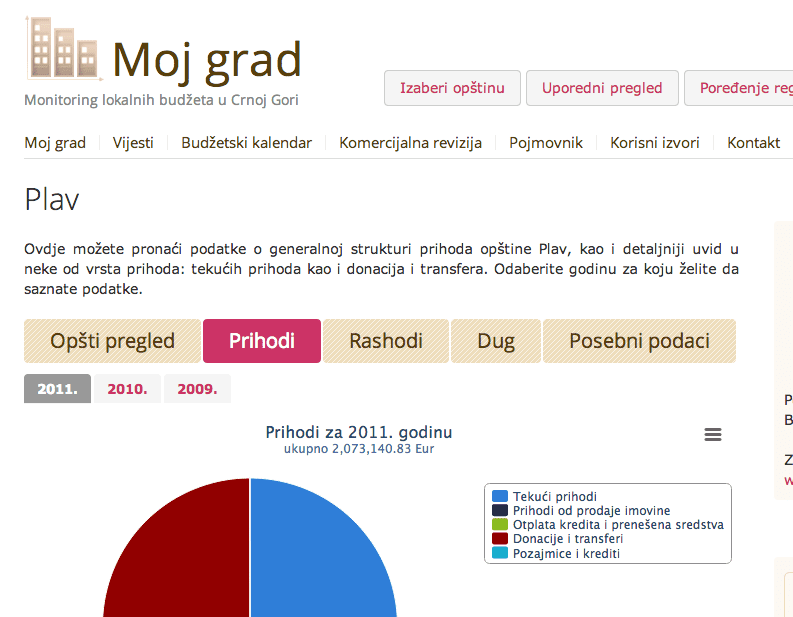 Institute Alternative maintains the website on local finances, www.mojgrad.me, aimed at improving the transparency of budgets of local governments. According to the data available to us, Budva and Plav have not yet adopted Final Accounts of the Budget for 2012. This means that, even though we have largely entered the year 2014, we still do not have complete information on how these municipalities were allocating and spending funds in 2012.

We remind that the current situation is no exception. These municipalities have thus far published their annual accounts of the budget with huge delays. For example, Final Accounts of the Budget for 2011 Budva and Plav adopted only at the beginning of this year.

Particularly problematic is the situation with non-publishing of the Final Account of the Budget of Plav, because their Final Account for 2011 received a negative opinion of the State Audit Institution due to serious irregularities that have been detected.

We believe that the seriousness of the situation allows for the Government to use the possibility prescribed by the Law on Local Self-Government and warn the mayors that municipalities have to perform their duties.

In addition, it is necessary that the Ministry of Finance considers undertaking measures at its disposal, according to the Law on Local Government Financing, towards the municipalities in violation of legal provisions related to the key budget documents. These measures entail temporary suspension of payment of assigned income to these municipalities. We believe that until Budva and Plav publish their Final Accounts of the Budget and make public the manner in which they spent resources in 2012, these municipalities should not be granted additional funds from taxpayers.

Timely publication of final accounts of the budget is essential for budget transparency, as it represents the final image of budget execution and most important instrument for the control of local budgets. Every decent deadline for publication of Final Accounts of the Budget of Budva and Plav has passed. Now it up to the Government and the Ministry of Finance to undertake measures at their disposal according to the law and compel them to fulfill their basic legal obligations.