Skip to content
Institute Alternative » Publications » Fulfilling the FORM OR SUBSTANCE? – Content Analysis of the Annual Performance Reports of the State Prosecutor’s Office and the Police Administration 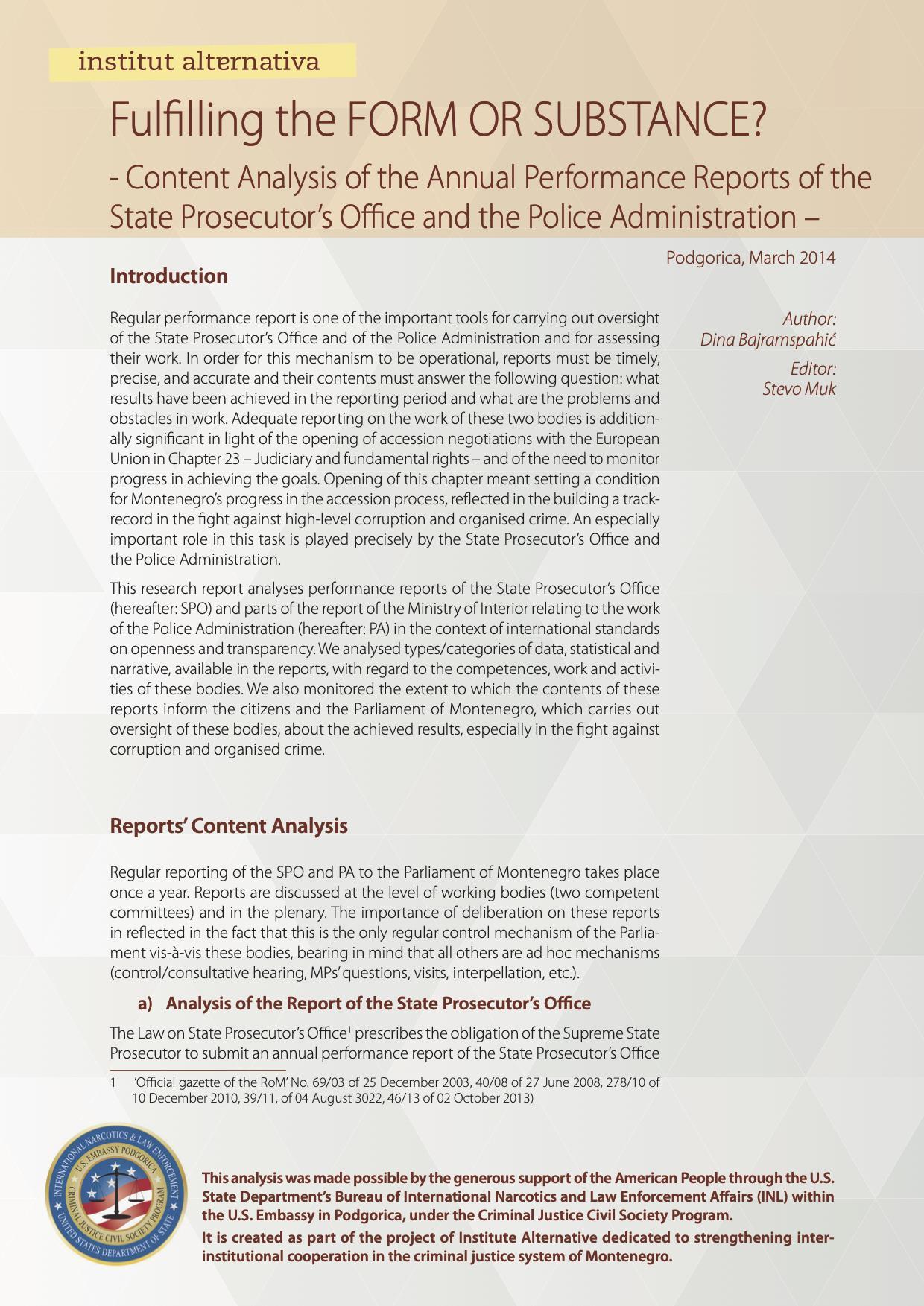 Regular performance report is one of the important tools for carrying out oversight of the State Prosecutor’s Office and of the Police Administration and for assessing their work. In order for this mechanism to be operational, reports must be timely, precise, and accurate and their contents must answer the following question: what results have been achieved in the reporting period and what are the problems and obstacles in work.

Adequate reporting on the work of these two bodies is additionally significant in light of the opening of accession negotiations with the European Union in Chapter 23 – Judiciary and fundamental rights – and of the need to monitor progress in achieving the goals. Opening of this chapter meant setting a condition for Montenegro’s progress in the accession process, reflected in the building a track-record in the fight against high-level corruption and organised crime. An especially important role in this task is played precisely by the State Prosecutor’s Office and the Police Administration.

This research report analyses performance reports of the State Prosecutor’s Office (hereafter: SPO) and parts of the report of the Ministry of Interior relating to the work of the Police Administration (hereafter: PA) in the context of international standards on openness and transparency. We analysed types/categories of data, statistical and narrative, available in the reports, with regard to the competences, work and activities of these bodies. We also monitored the extent to which the contents of these reports inform the citizens and the Parliament of Montenegro, which carries out oversight of these bodies, about the achieved results, especially in the fight against corruption and organised crime.

This analysis was made possible by the generous support of the American People through the U.S. State Department’s Bureau of International Narcotics and Law Enforcement Affairs (INL) within the U.S. Embassy in Podgorica, under the Criminal Justice Civil Society Program. It is created as part of the project of Institute Alternative dedicated to strengthening inter-institutional cooperation in the criminal justice system of Montenegro.