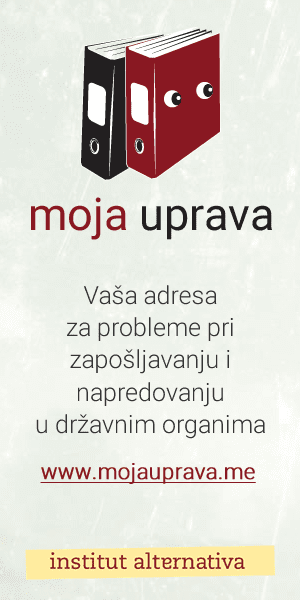 Testing procedures and violation of the rank lists for appointing civil servants and state employees are the most common causes of dissatisfaction of the candidates for the job in state authorities, according to the complaints submitted on our website “Moja uprava”.

On the website mojauprava.me, launched by the Institute alternative (IA) within the project “State Administration in Montenegro – Equal for All!” and financially supported by the U.S. Embassy in Podgorica, 14 complaints have been submitted so far.

The candidates often express their dissatisfaction for not being appointed for the position even though they were top – ranked candidate after testing procedure. Also, the Law on Civil Servants and State Employees stipulates that only the top – ranked candidate can be appointed for the position. Only exceptionally and with special explanation, the head of authority is allowed to decide to appoint another candidate after the interviews have been conducted.

However, the cases of the candidates that have submitted a complaint on mojauprava.me show that the explanations of the elders are not convincing enough.

Namely, the elders’ explanations often refer to applying criteria reserved for skills assessment and forming rank lists as oral interview criteria, favouring candidates who have already worked at the state authority or have made a better impression.

These cases correspond with the findings of our Monitoring report Recruitment and Promotion in State Authorities, which points to too broad interpretation of the elder’s discretionary right not to select the top – ranked candidate.

Other complaints addressed to our organization mostly refer to irregularities during the testing procedures, or incorrectly scored tests, the overage grade during studies and professional and working skills of the candidates.

Candidates also warn of privileging some of the candidates by the officials who prepare practical tests for testing competences for performing a given job.

“You can do the general part of the testing procedure perfectly, but when it comes to special part, it is very difficult to pass, because you don’t know what to study or what literature you should use (the state authority won’t provide that information), but the one for whom the position is being kept (and 98% of public announcements are “setup”), knows questions, and even answers, in advance, considering that the officers for personnel affairs are preparing the questions”, states in one of the complaints.

IA has prepared a guide for the candidates for the job in state authorities, 2 000 copies, which will be distributed to all interested candidates, with the assistance of the Human Resources Management Authority.

The finding and results of our one – year long project “State Authority in Montenegro: Equal for All” will serve as a basis for advocating amendments to the Law on Civil Servants and State Employees, which were planned for the last quarter of this year.