Skip to content
Institute Alternative » About us » Our team » Milena Milošević 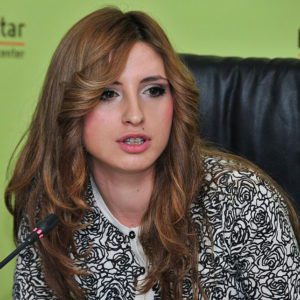 Milena Milosevic has been working at Institute Alternative since July 2012, where she namely focuses on public policy research in the area of public administration reform, and overall fundraising, communication and advocacy efforts of our organization. Currently, Milena is coordinating an EU-funded project “Civil Society for Good Governance: To Act and Account!”, whose one of the main components is monitoring of public administration reform in Montenegro. Her previous professional experience includes two years of work as journalist for Balkan Investigative Reporting Network, internship at Hellenic Centre for European Studies, and work for Centre for Investigative Journalism in Serbia. Her education background includes political science with the focus on South East European region (master degree from Faculty of Political Science and Public Administration, University of Athens) and political science, media and communications (Faculty of Political Science, University of Belgrade). She is author of numerous publications of IA, such as Public finances and Accountability of Administration: What does the Protector protect?, Back to Basics: Re-affirming the Rule of Law in the Western Balkans, Monitoring Report: Recruitment and Promotion In State Authorities In 2014, Professionalization of Senior Civil Service in Montenegro: Between State and Politics. Milena was also a contributor to the Study: Freedom of Media in the Western Balkans, European Parliament, October 2014. She is participant and speaker at many conferences in Montenegro and abroad.