Skip to content
Institute Alternative » Public administration » Public finances and accountability of administration: What does the Protector protect? 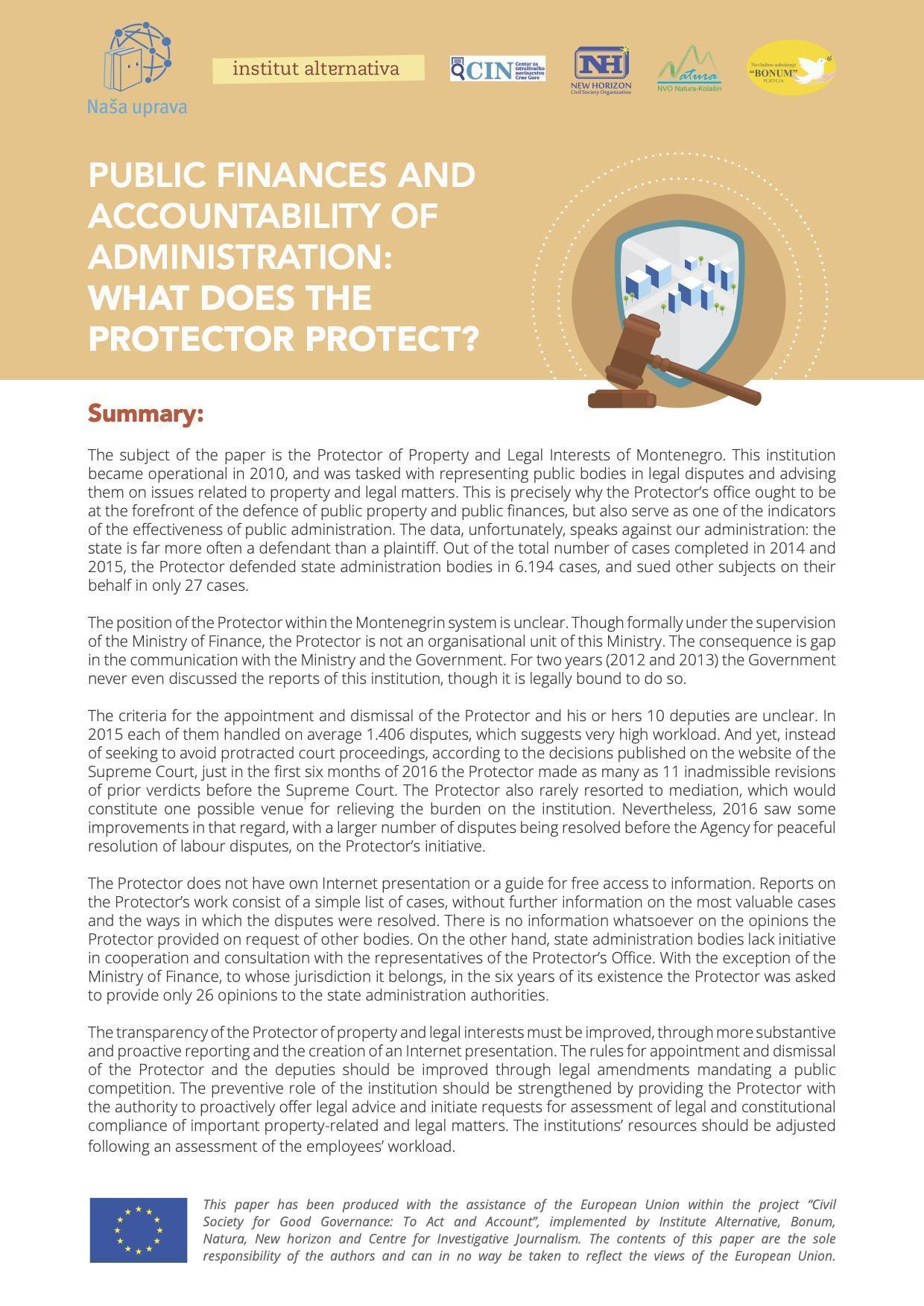 The subject of the paper is the Protector of Property and Legal Interests of Montenegro. This institution became operational in 2010, and was tasked with representing public bodies in legal disputes and advising them on issues related to property and legal matters. This is precisely why the Protector’s office ought to be at the forefront of the defence of public property and public finances, but also serve as one of the indicators of the e effectiveness of public administration. The data, unfortunately, speaks against our administration: the state is far more often a defendant than a plaintiff. Out of the total number of cases completed in 2014 and 2015, the Protector defended state administration bodies in 6.194 cases, and sued other subjects on their behalf in only 27 cases.

The position of the Protector within the Montenegrin system is unclear. Though formally under the supervision of the Ministry of Finance, the Protector is not an organisational unit of this Ministry. The consequence is gap in the communication with the Ministry and the Government. For two years (2012 and 2013) the Government never even discussed the reports of this institution, though it is legally bound to do so.

The criteria for the appointment and dismissal of the Protector and his or hers 10 deputies are unclear. In 2015 each of them handled on average 1.406 disputes, which suggests very high workload. And yet, instead of seeking to avoid protracted court proceedings, according to the decisions published on the website of the Supreme Court, just in the rst six months of 2016 the Protector made as many as 11 inadmissible revisions of prior verdicts before the Supreme Court. The Protector also rarely resorted to mediation, which would constitute one possible venue for relieving the burden on the institution. Nevertheless, 2016 saw some improvements in that regard, with a larger number of disputes being resolved before the Agency for peaceful resolution of labour disputes, on the Protector’s initiative.

The Protector does not have own Internet presentation or a guide for free access to information. Reports on the Protector’s work consist of a simple list of cases, without further information on the most valuable cases and the ways in which the disputes were resolved. There is no information whatsoever on the opinions the Protector provided on request of other bodies. On the other hand, state administration bodies lack initiative in cooperation and consultation with the representatives of the Protector’s Office. With the exception of the Ministry of Finance, to whose jurisdiction it belongs, in the six years of its existence the Protector was asked to provide only 26 opinions to the state administration authorities.

The transparency of the Protector of property and legal interests must be improved, through more substantive and proactive reporting and the creation of an Internet presentation. The rules for appointment and dismissal of the Protector and the deputies should be improved through legal amendments mandating a public competition. The preventive role of the institution should be strengthened by providing the Protector with the authority to proactively o er legal advice and initiate requests for assessment of legal and constitutional compliance of important property-related and legal matters. The institutions’ resources should be adjusted following an assessment of the employees’ workload.