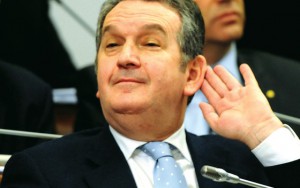 These days we are impatiently looking forward to the Local committee for Carine and Aluminium Plant Podgorica, KAP (full title is pretentious and too long) to finally complete its work and prepare the announced report. That will be the first step in the fulfillment of what was presented as a key point of the agreement on the formation of DPS-SDP government in Podgorica – whether the activities related to the sale of land to company Carine and the demarcation between the capital city and KAP have damaged the public interest.

Although at the time of forming the government in the capital city, this was mentioned as a burning issue, nobody seemed to hurry to complete it. The Committee, which is already two months late with the report, was established seven months after the government was formed in Podgorica.

This process is not interesting because we expect it to make some significant view on whether the damage was to the public interest was indeed done, with the activities related to the “Carine” and demarcation with KAP. It is clear that the Committee composed of 4 members of DPS and one member from SDP cannot bring any revolutionary decision on activities of the previous mayor, Mugoša, especially if you know that the President and members of the Committee from DPS were councilors during mandate of the previous mayor – therefore, they approved the decisions whose legality is now being assessed.

The process is interesting as an example of the combination of the executive and representative branches of government in the Capital city interwoven to the extent that they cannot be even recognized. This Committee was established by the mayor Stijepović and it is composed of the councilors of the local parliament who were assigned with the task to prepare the report about previous mayor’s aforementioned activities. Based on their report, the mayor will compose a new Act to inform – none other than the local parliament – i.e. the councilors themselves. What would be the next steps of the parliament, it is still not known. Judging from the facts at our disposal now, the councilors of DPS and SDP would probably wait for further instructions of the mayor.

This would be the same as if the Government would initiate the parliamentary investigation, appoint the Inquiry committee and order the MPs, who appoint and control the Government, to write a report. The local parliament, as the body which appoints the mayor and controls his work, is now in the position that it has to deliver reports to the mayor.

Although the Law on Local Self-government clearly stipulates the possibility for the parliament to establish the committee on an ad-hoc basis, the councilors of DPS and SDP have left this to the mayor.

At the beginning, it was said that the Prosecutor’s Office would be invited to examine these contracts while the next engagement on this case was the one of the special auditor. Moreover, it was announced that the State Audit Institution would examine the activities of the former mayor. (SAI is being mentioned whenever we talk about some sort of control, while forgetting at the same time that SAI is not obliged to perform audits according to the dictates of anyone, including political parties). The opposition has also proposed that the parliament establishes the committee on this issue, but instead of that, DPS and SDP have chosen that it should be the mayor’s committee.

It is clear why is DPS happy with this arrangement (if you have to be controlled, the best solution is to do it yourself), but why did SDP agreed upon it, refusing the opposition’s proposal? Their inarticulate justification was that the participation of the mayor would help in carrying out this process faster and with all the necessary information – “we will have at our disposal all the information in the possession of the service.”

It should be noted that all information in the possession of the service of the capital city are available not only to the councilors, but to all citizens willing to write the request to the free access to information. One of the consequences of their decision is the refusal of the opposition to have anything to do with the work of such commission.

To make thing worse, in the explanation of the Decision on the establishment of this commission it is stated – if this proves to be a good model, we will use it in the future. Therefore, it is possible that we will have new parliamentary committees established by the mayor whose task would be to file a report which would be used by the mayor to report to the parliament on some issue.

The position of the councilor in Montenegro is shameful enough the way it is and it did not need this last humiliation. Unprofessionalized status (the members of the ruling coalition get appointed for the positions in other institutions while the members of the opposition receive the flat rate for their work), extremely short deadlines for the adoption of the budget, the correction of errors in budget planning through the re-balancing in December, forged final accounts of the budget, delivered with a delay of several years in many municipalities, the work reduced to stamping the decisions of the local authorities.

Whatever the outcome of this Committee’s work is going to be (and it is obvious that it will not be anything significant), I hope that it is going to be the last one. If the councilors want to conduct an investigation, if they want to be more active in controlling the executive branch, they should do it themselves, and not by the order of the mayor or the municipality president. If nothing else, it should be done in order to retain the councilors’ personal dignity as well as the illusion that the local parliaments are somewhat important in Montenegro.