It seems to me that the public knows very little about the true ratio of political power, since no public opinion polls have been published prior to these local elections, while it was a frequent practice to do so before. 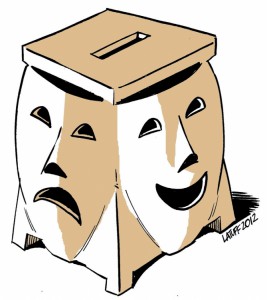 Towards the elections in fourteen municipalities in Montenegro, apparently everyone knows everything. Everyone acts tough and pretends to be smart. They lead their “consistent” policies and promise their “best” mayors. Apparently, the only thing that remains to be seen is how the victory will be celebrated.

It seems to me that the public knows very little about the true ratio of political power, since no public opinion polls have been published prior to these local elections, while it was a frequent practice to do so before. The opposition has previously complained frequently about the publication of results, and now it has been allegedly conducting their opinion polls, but have not been publishing them, except as an overall figure (for instance: “40% DPS, 60% opposition”).

If this really is the case, if each and every party that is not DPS is indeed the opposition and will join together, then these parties will not remain in opposition, but will form the government, while DPS will become the opposition. It remains to be seen. However, that all hell broke loose implies the redeployment within the DPS, the obligatory presence of the beloved boss at the promotions, hasty creation of an atmosphere of division and fear through the campaign speeches of leaders of DPS, and through the DPS daily newspaper financed by the citizens of Montenegro and read by the angry members of DPS.

Indeed, everything leads to a conclusion that following the elections the situation will be unsatisfying for DPS, and that a smile on their faces can be put back on only by some mischievous councilor or a mischievous political party that would, despite fierceful election campaign led against DPS, still find valid reasons to enter into a formal or non-formal coalition with DPS, and thus provide a crucial support to the mayor nominated by DPS.

Therefore, on one hand the situation in which DPS will not have a majority of representatives in the City Parliament rejoices me, while on the other hand, it scares me.

I am aware of the amount of pressure that will be put on the parties, as well as on the councilors.

That is why my (naive) slogan (request) reads: “The citizens (voters) have the right to know for whom they vote.”

Sounds like the description of how things should be done, but it is not like that in reality. (Yesterday) Today you can vote for an opposition party, only to see your vote belonging to DPS tomorrow. It happened to the voters in Kolašin when part of Socialist People’s Party (SNP) forged the coalition with Democratic Party of Socialists after the elections. It happened to the voters of opposition with the People’s Party (NS), which had been supporting Mugoša and DPS in Podgorica for years. (By the way, NS which had, jointly with Democratic Serbian Party (DSS), been part of the coalition lead by New Serbian Democracy (NSD), and all together formed an electoral list “Better Podgorica – Better Montenegro”, comprised of Movement for Change, SNP, Party of Pensioners and DC, as well). I do not want for Positive Montenegro in Niksić and Drago Djurović to repeat.

I do not want for Nova and councilor Vujačić to repeat. Therefore, it is reasonable to ask all the parties: “With whom do you want to form a coalition after the election?”. Therefore, it is reasonable to ask the electoral lists leaders: “Can you provide unity and discipline inside your councilor’s club?”. I believe that responsible politicians, electoral lists leaders of Democratic Front and of SDP-Positive Montenegro have duty to speak out whether and with whom they would negotiate after the election.

Moreover, I believe that each person nominated for a councilor should sign a statement committing not to vote for the DPS’s candidate for mayor of Podgorica. That would be politically and morally responsible. To announce in advance – I am not Drago Djurović. This way, parties and coalitions that do not want to cooperate with DPS would encourage their potential voters, sending them a clear message that their vote will not be thrown into a well of personal advantage of interest groups within DPS, bosses and/or party leadership, anonymous councilors and unknown individuals.

Speaking of councilors, political parties would have to present the people that are nominated at the electoral lists to the voters and to the public. Taught by experience of many former elections, as well as the current campaign, we could conclude that except for the list leaders and Djukanović, councilors have nothing to say. If that indeed is the case, then this is not good, since the councilors would still have to say something in the municipal assemblies.

Media could contribute in a great manner to a more quality presentation of the candidates in the following days if they would present biographies of candidates and ask questions these people with names, but no publicly recognizable faces. If the media does this for Podgorica only, they will be able to change the view on the elections and the people who run for municipal councilors. The possibilities that the media have are numerous. Imagine if every day in Vijesti, Dan, Dnevne novine, and Pobjeda councilors would speak about themselves and reply to the smart and correct journalists’ questions.

Political parties have signed yet another agreement. However, we all know that political parties do not care much for obeying the law, let alone for code of ethics or agreements. It would not be the first time for them to, while swearing in the rule of law, fail to abide by the laws they had passed. This is illustrated by the fact that the electoral lists encompass civil servants up to the level of deputy minister (now popularly called director of Directorate), although the law states that they should not publicly express their political affiliation.

This does not apply to DPS, or SDP for that matter, since they have nominated numerous government officials and deputy ministers – members of their municipal and main boards. I assume that the same practice applies to the opposition parties which form the government at the local level in several municipalities.

Text was originally published in the ,,Forum” section of the daily Vijesti