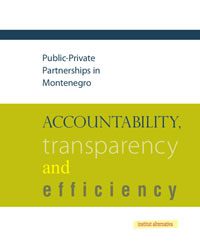 Although the cooperation between the public and the private sector in developing infrastructural sites dates back to the eighteenth century, it has reached its global expansion and popularisation only in the last decade of the previous century. The intense interactive link between the technically more developed private sector and the public authorities is largely determined by the lack of funds for capital investment in state budgets.

Public-private partnerships (PPP) in Montenegro are increasingly used as a mechanism for covering the budget deficit. Moreover, the government has opted to intensify the use of this model in the privatisation process, thus ‘opening’ all the sectors to PPP. However, as PPP is still in its developmental stage in Montenegro, the projects that have been completed through public-private partnerships do not mirror the positive examples from other European countries. Additionally, although the legislative framework of PPP has been enhanced by the adoption of the 2009 Law on concessions, it is still not fully harmonised with the EU’s directives regulating this area. The lack of harmonisation of legislative acts is most obvious in terms of the imprecise definition of concessions for public works. By the same token, the definitions of limited procedure and competitive dialogue have not been adequately transposed from the EU’s directives.

Despite the relatively high number of PPPs that were realised in Montenegro, the access to information about the contracts concluded is extremely difficult. Thus, there is an obvious need for the establishment of a central register that would contain all the PPP contracts concluded so far. In tandem with the limited transparency of the entire process, there is also a lack of democratic control. The public has no access to the annual payment schemes for PPP projects, and the financial reports of concluded projects are unavailable. Delays in the work of the authority specialised in concessions – the Concessions Commission – is also manifest.

The implementation of PPP has significantly been burdened by the violation of legislative procedures and the preferential treatment of certain private companies, which contributes to the participation of different parties to the tender procedure on an unequal footing. The failure of certain tenders and the problems that have emerged with certain private partners confirm the premature selection of partners and the poor risk assessment of such contracts. Very often, the partners that were preferentially treated during the bidding impose contract conditions, which are accepted and implemented even when they manifestly violate laws. In addition, the details of certain PPP contracts assume the development of infrastructural sites on the locations that are not included in the Spatial Plans.

Montenegro hardly ever relies on the experience of other countries, while failing to participate to the South East European Public Private Partnership Network. The activities of this association should lead to common initiative, so that some common projects could be financed through the EU’s special funds in the future.

At the local level, there is an obvious confusion in the distribution of competences for PPP in Montenegro. In some municipalities there are positions of ‘exclusive negotiators’ with foreign investors.

There is a growing interest in all Montenegrin municipalities for projects modelled after PPP. However, there are many municipalities where PPP has not been implemented so far.