– or, ahead of the public discussion on the Law on Special Prosecution – 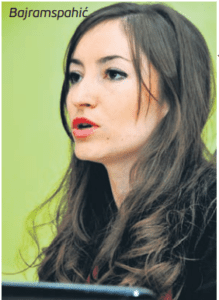 Although the fight against corruption and organized crime is one of the most frequently used phrases in the Montenegrin public discourse, European Commission’s 2013 Montenegro Progress Report continues to express serious concerns for the situation in this area. Isolated cases of arrests as a result of work of the Special Prosecutor’s Office do not create an impression of uncompromising determination of the state for everyone in Montenegro to be equally responsible before the law. The idea of reorganization and establishment of the independent Special Prosecutor’s Office for the Suppression of Corruption and Organized Crime came from Miroslav Lajčak, Minister of Foreign Affairs of Slovakia. This proposal was endorsed by the Government of Montenegro, which announced its plan to establish the Special Prosecutor’s Office modeled by the Croatian Uskok.

The Government’s Analysis of the Organizational Structure, Capacities and Authorities of the State Bodies and Administration Bodies in Combating Organized Crime and Corruption was supposed to provide context for the generally adopted decision for the formation of the Special Prosecutor’s Office by pointing out to the problems in the work of the current Special Prosecutor’s Office. However, the aforementioned problems were not presented in the published Analysis. This will remain one of the stumbling blocks for any reform of the SPO, because without understanding the problem an adequate solution cannot be found. According to the Plan for realization of conclusions from the Analysis, the public debate on the Draft Law on the Special Prosecutor’s Office shall be conducted in June 2014.

Following the indicators of the need for further reform of the institutional framework for investigations of corruption and organized crime in Montenegro, the research team of Institute Alternative (IA) has published a comparative study aimed at providing alternatives and models for improving cooperation and efficiency of all stakeholders, especially the Prosecution and the Police, in January 2014. We analyzed and indicated to the problems and lessons learned from five countries’ institutional frameworks: Bulgaria, Lithuania, Macedonia, Romania, and Serbia, bearing in mind that these countries face the same problems and are at different levels of reform of the system. The project was supported by the Bureau of International Narcotics and Law Enforcement Affairs (INL) of the State Department through the Embassy of the United States in Montenegro within the “Criminal Justice Civil Society Program”.

There is an international and regional tendency of prosecutors’ offices to specialize in criminal offence of corruption and organized crime. Old member states of the European Union have specialized bodies in charge of solving complex criminal offences such as the Prosecutor’s Office for the fight against mafia in Italy, the Office for suppression of corruption within the Prosecutor’s Office in Spain, Serious Fraud Office in the United Kingdom, and alike. In the countries of Eastern Europe similar models have been established during the last decade: in Croatia and Latvia in 2001, in Romania in 2004, in Macedonia in 2008, in Slovenia in 2011, and in Bulgaria in 2012.

Yet, the comparative experience shows that the establishment of special prosecutor’s offices does not guarantee quick and significant results. The path to better, greater and more significant results of special prosecutor’s offices in the fight against organized crime and corruption depends on a set of internal and external factors. Time is needed for first visible results.

Of particular importance for a successful start of work of the SPO is having a wide societal consensus with regard to appointment of the key office holders in the SPO. Additionally, employees in the State Prosecutor’s Office need to acknowledge the necessity to replace part of the special prosecutors’ team in order for reforms to take effect and create a new working environment based on fundamentally different principles of work.

Prosecutors and other employees in the Special Prosecutor’s Office must undergo prior and ongoing security and asset checks. It is the recommendation of IA for this to be an exclusive requirement in the process of appointment of the Chief Special Prosecutor and special prosecutors. This practice has become a standard and takes into account the special sensitivity of the cases that fall under the competence of special prosecutor’s offices. In that sense, the law should prescribe the procedure and the role of the competent state administration body which would carry out such checks, including a provision defining the necessary consent of the person over which the checks are performed. In the case of a negative opinion, an insight into the material collected should be provided, as well as the possibility for the person in question to respond to such claims.

The question of true competences of the Special Prosecutor’s Office is one of the key issues to be dealt with. It should be regulated in accordance with the principle of unburdening the SPO. Therefore, High State Prosecutor’s Office should handle cases for which it has the necessary capacities. The definition of criminal offences that fall under the competence of the SPO should include all forms of organized crime, corruption-related offences committed by public officials, in line with the definition contained in the Law on prevention of conflict of interest, or civil servants above a certain amount, thereby precisely defining the competence of this prosecutor’s office for corruption of greater danger for the public. Nevertheless, if by the new Law on the Special Prosecutor’s Office investigative tools of the SPO, as well as administrative and technical capacities, are adequately improved, the competences should not be placed too narrow, and should include other difficult to prove criminal offences.

Law on the STO should stipulate that public authorities, administrative bodies and companies, mainly banks, make themselves available to the STO and discipline themselves to promptly respond to requests made by the SPO and submit requested data. This shall be ensured by prescribing strict misdemeanor provisions for failure to comply with the requests of the SPO within the stipulated timeframe. A possibility of referral of employees of other agencies, like police officers from Customs Administration, Tax Administration, Administration for Prevention of Money Laundering and Financing Terrorism, Inspection Directorate, to work at the SPO should be provided, as well as the possibility of forming investigative teams.

The most complex and crucial challenge is defining communication, cooperation and coordination between the SPO and the Police Administration, both at the level of heads of these two bodies, as well as at the level of prosecutors and police officers working together on a daily basis. Therefore, one segment of the Criminal Police should be institutionally and organizationally linked to the STO. In order to strengthen the authority of the Chief Special Prosecutor in the strictly hierarchically structured Police Administration, Chief of Police shall, after obtaining the opinion of Chief Special Prosecutor, appoint and dismiss heads of sectors and adopt a decision which regulates in greater detail the work of the department in accordance with the law.

Evaluation of the work results of the Chief Special Prosecutor and special prosecutors should be in line with the stricter criteria than for other state prosecutors. In case of lack of good results of a special prosecutor, the possibility of returning to the state prosecutor’s office in which the function was performed prior to the appointment to the STO should be provided. Similarly, the determination of salary and other factors of motivation of prosecutors and expert and administrative staff employed at the STO is important as a prerequisite for the preservation of the integrity and professionalism of the staff. Furthermore, it represents the need to ensure the interest of the most qualified experts in the field to work in this institution.

It is necessary to establish the adequate qualifications for expert staff of the SPO, bearing in mind the real needs and realistic limitations in the qualified labor market. There should be room for outsourcing possibility both at the national and international labor market for highly specialized services. Especially interesting is the solution in Serbia, where the measure of ‘introducing a team of economic forensic experts in public prosecutor’s offices’, which is a response to difficulties in initiating and carrying out financial investigations due to the absence of adequate experts in the economic-financial area in the prosecution, is introduced.

Given the high expectations of the new STO and also a very likely extension of its competencies by the new law, the STO should prepare a special annual performance report, which shall be evaluated by the competent working body of the Parliament. The contents, i.e. the type of information to be encompassed by this report should be defined in advance. Additionally, public relations and publishing information on cases of special interest must be significantly improved.

Finally, in order to avoid legal uncertainties, a special challenge will represent harmonizing this Bill with amendments to a number of laws governing the work of the State Prosecutor’s Office and the Police, such as the Criminal Procedure Code, the Law on State Prosecutor’s Office, the Law on Conducting Financial Investigations, the Law on Prevention of Money Laundering and Terrorist Financing, the Law on Prevention of Corruption, etc. Therefore, special attention should be devoted to coordination of these processes.

The text is originally published in the electronic monthly magazine for European Integration “European Pulse“, published by Centre for Civic Education (CCE)