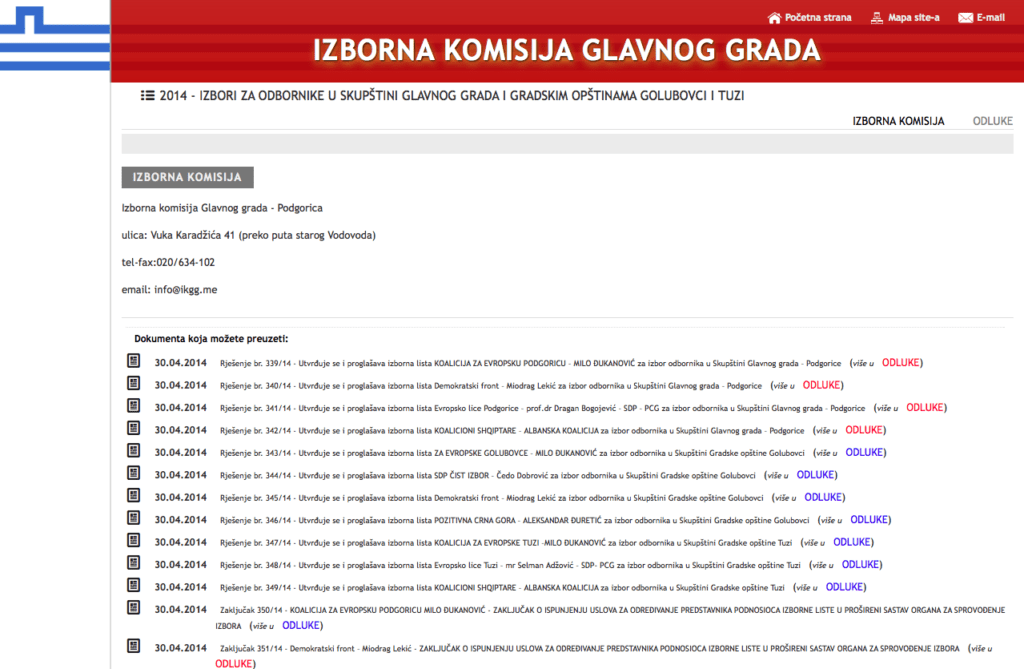 Less than two weeks before election day, the Electoral Commission of the Capital Podgorica has not yet made public the electoral lists containing names of nominees for councilors of the City Parliament.

As stipulated by the Law on Election of Councilors and Members of the Parliament „municipal election commission shall have its website to immediately publish its acts and information of significance for carrying out of elections“.

However, besides the decisions on determining and proclamation of electoral lists from 15th and 30th April 2014, the website does not contain composition of the aforementioned electoral lists.

Consequently, citizens do not know who the people designated to represent their interests in the period to come are, and do not have access to information based on which they ought to make a decision on the election day.

The interested public is therefore compelled to familiarize themselves with the composition of electoral lists by exploring media reports, considering that even the political parties have not yet published electoral lists on their websites.

Institute Alternative (IA) has previously pointed out that the composition of electoral lists, as presented in the media so far, represent violation of the Law on Civil Servants and State Employees.

Specifically, this Law stipulates that “civil servants and state employees shall perform their tasks in politically neutral and impartial manner, in accordance with public interest” and that they are “obliged to restrain from public demonstration of their political convictions”.

On the other hand, certain names on the electoral lists raise suspicion that the persons currently holding office as deputies of ministers have been nominated for councilors.

In the meantime, Institute Alternative (IA) has submitted initiatives to the Administration Inspection of the Ministry of Interior and to the Ethics Committee in charge of monitoring the application of the Code of Ethics of Civil Servants and State Employees, in order to urge them to undertake appropriate measures and verify the composition of all submitted electoral lists and determine whether violations of the Law on Civil Servants and State Employees has been committed.

In the initiative submitted to Dubravka Božović, chairman of the Ethics Committee, it is stated the following: “As a reminder, Article 10 of the Code of Ethics of Civil Servants and State Employees (Official Gazette of Montenegro, no. 20/12) stipulates that „the employee shall be appropriately and neatly dressed and may not, by the way he/she is dressed (…) express political, religious or personal adherence which could cast a doubt on his/her neutrality and impartiality in the performance of duties.”