After “The Bomb” affair in North Macedonia, that uncovered the illegal wiretapping of 20,000 citizens, comprehensive legal and institutional reforms under the auspices of European and Euro-Atlantic integration have begun.

On the other side, reform of the intelligence sector in Serbia is one of the benchmarks within Chapter 24, in the context of negotiations with the European Union.

During the panel discussion, the following issues will be discussed :

Answers to these questions will be offered by: 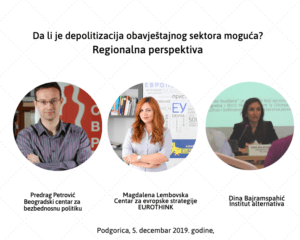 • Dina Bajramspahić, IA, will talk about Montenegrin intelligence sector reform and she will also moderate the discussion.

The panel discussion will be held on Thursday, December 5, at the CentreVille Hotel, starting at 5am.

This discussion is supported by the European Fund for The Balkans through the project “Watching the Watchers: Towards Accountable Intelligence Services in the Western Balkans” which is jointly implemented by Belgrade Center for Security Policy from Serbia, the Center for European Strategies – EUROTHINK from North Macedonia and the Institute Alternative from Montenegro.