Level of availability of Montenegrin MPs for communication via email is low, according to the research conducted by Institute Alternative and designed to determine the response rate of Montenegrin MPs to email messages sent to addresses listed on the parliamentary website.

Institute Alternative conducted research aimed at identifying the level of availability of MPs for citizens’ questions sent to email addresses published on the website of the Parliament.

In the interest of informing citizens about their elected representatives and enhancing communication between citizens and MPs, biographies of MPs were published on the parliamentary website along with contact information which ought to include a phone number, a fax number, and an email address for each member of the Parliament. 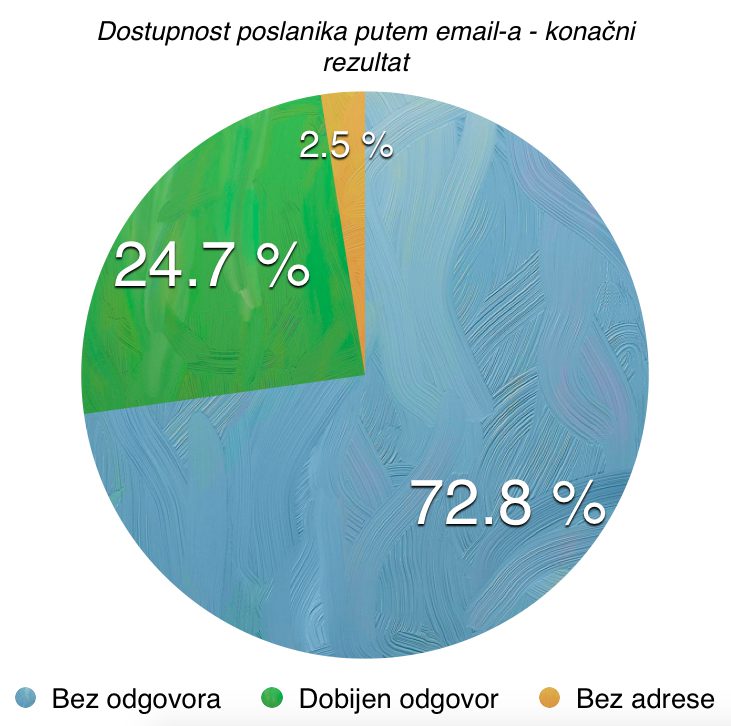 However, the research results indicate that the email address of one MP is not listed on the website while another one is invalid. Additionally, phone numbers and fax numbers are made available for 47 MPs or 58%.

We sent email messages to the remaining 79 MPs explaining the objective of our research and asking for the confirmation of the receipt. In the period between 22 and 28 December, only 20 MPs replied to our email.

With respect to the circumstances which could have affected the results, such as numerous responsibilities of the members of the Parliament, as well as the fact that the email was sent from IA’s address which is fairly familiar to a number of MPs, we consider that the 24.7% response rate is extremely low.

Strengthening accountability of the Parliament to the electorate, facilitating citizen engagement in the legislative process, as well as ensuring access to information about the Parliament and its work in an easily accessible way, represent important preconditions for bolstering democratic governance in Montenegro. In theory, parliaments are forums in which citizens’ preferences are aggregated by political parties and expressed as public policies.

Taking into consideration internet penetration rate in Montenegro and the fact that 63.6% of households in Montenegro have internet access[1], information and communications technologies (ICTs) could be used to facilitate public participation in the political process by allowing citizens to comment on legislation or by fostering dialogue with their MPs.

As a reminder, Code of Ethics for MPs[2] stipulates that “during their mandate, each member of the Parliament shall behave in a respectful manner towards citizens” and “shall promote and encourage every measure that contributes to openness to the public”. Moreover, Guidelines for Parliamentary Websites[3], prepared by the Inter-Parliamentary Union[4], specify that it is necessary to “enable members, committees, and officials to efficiently receive, manage, and respond to email(s) from citizens and civil society”.

Achieving higher level of accountability of the parliament to the electorate contributes to its strengthening, as well as to increasing level of trust in this institution. In many developing democracies, parliament may be the only institution capable of providing checks and balances that prevent the executive from monopolizing power. Nevertheless, citizens’ level of trust in the Montenegrin Parliament has been lower than the trust in the President, the Government, the Courts of Montenegro, and the European Union, according to the opinion polls conducted in the past four years.[5]

As part of their responses, several MPs pointed out that citizens rarely contact them via email and that configuration information for the email domain skupstina.me has not been sent to all MPs. They also expressed doubts about the privacy of data exchanged via the “parliamentary email”.

Furthermore, we encourage citizens with the internet access to use ICTs when contacting their elected representatives and we invite MPs to recognize the importance of citizen participation and openness of the decision-making process.

Institute Alternative, with the support of the Open Society Foundations – Think Tank Fund, implements the project “Analytical Monitoring of the Oversight Function of the Parliament” which aims to strengthen the impact of implementation of the parliamentary control mechanisms.

[1] The use of information and communication technologies in Montenegro in 2014, press release issued by Statistical Office of Montenegro – MONSTAT, 31 October 2014.

[4] The IPU is the international organization of Parliaments with 166 members, including Parliament of Montenegro.