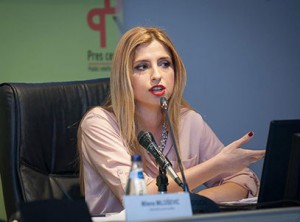 The government plans to reduce the number of public sector employees by 5,000 people, by 2020, while the political influence in public administration is unavoidable, as the key institutions – ministries are guided by political figures, said Milena Milošević, public policy researcher at the Institute alternative, in an interview with Daily ”DAN”. She warned that merit-based employment has not been introduced, and that the reform consists only of “cosmetic measures”.

Stance that the public sector is enormous mainly comes from the fact that this sector, according to the latest available data, employs around 56,000 people, said Milošević, stressing that it is fully justified to think that our administration is cumbersome.

However, Institute Alternative often has to replace state authorities in demanding tasks of counting employees in public administration and in the public sector in general. For example, there are no official data on the number of employees in the so-called agencies and public enterprises.

Information on the employees at the local level has been declared confidential, as well. This shows only the extent of the problem, since we do not have reliable baseline data to resolve it – she notes.

She adds that the employment policy in Montenegro is mainly based on the exchange of working positions for a certain benefit, and therefore not based on an analysis of actual needs and scope of work of certain institutions and authorities.

The well known illustration of the problem is the fact that some local cultural centers employed even several dozen employees, more than the entire ministries – she recalls.

On the other hand, despite the obvious enormous size of the public sector, we have a situation where the job positions for 2.000 people more are envisaged by the internal organization acts of our strate administration, Milosevic highlights.

– So, despite the fact that we often hear that our administration is cumbersome, the Government and the Human Resources Management Authority, approved regulations envisaging more jobs than it can fill up – she said. Milosevic added that this practice is not sustainable in the long term.

– The current aim of the Government for the entire public sector is to decrease the number of employees to 2020 by 4,000 to 5,000. This reduction is likely to come under pressure from the public debt, but it remains unclear how it will be implemented – by agreement or termination of employment. Will we once again be deprived of quality staff where we need it – to work on development issues and to implement key reforms – noted Milosevic.

She stressed that public administration reform and adoption of the first strategic document in the field has been firstly pursued in 2003. She believes that time has been wasted, and the implementation of specific measures has been delayed.

– We can also read this from the 2016-2020 Public Administration Reform Strategy, which has “copied” or taken over some measures, which previously failed to realize. Only one activity has been carried out so far. The Law on Administrative Disputes has been adopted, which was rather imposed by the need to harmonize the legal framework with the new Law on Administrative Procedures, but not the Strategy. Also, the formation of the Ministry of Public Administration has resulted in a “delay” of the implementation of certain measures – she said.

Milosevic pointed out that strictly following the deadlines is less important than final implementation of specific goals, without backsliding, especially in politically sensitive areas such as employment and rationalization of public administration.

– These are precisely the most problematic areas, where even the strategy does not envisage particularly ambitious goals. Merit-based employment has not been introduced, and the reforms in this area, so far, consisted only of cosmetic measures. Also, rightsizing of administration is a challenge, and it has implications for overall economic management in the country. However, as Institute Alternative has warned several times in the past few years, instead of the planned reduction, there was an increase in the number of employees in the public sector, especially at the local level. Local governments are, in general, especially neglected. They are not sufficiently involved in the reform. More comprehensive measures are not envisaged in terms of improving human resource management, accountability, the integrity and the public financial management at the local level – she said.

Milosevic says that political interference in public administration cannot be avoided, given that ministries are managed by political figures.

– After a certain level, the political impact should be minimal, which is not the case in Montenegro. On the contrary, positions that should be occupied by professionals, are occupied by individuals who are directly exposed in front of some political parties. This, of course, refers mostly to the ruling DPS (Democratic Party of Socialists), which has a numerous civil servants in managerial positions, within its Council for monitoring of implementation of the electoral program. Other parties as well, feel that, after the conquest of power, they are naturally entitled to . In municipalities, power shifts are also accompanied by the turn-overs of senior manages. This is all indication that the political influence remains pervasive – she noted.

While commenting recent establishment of the Ministry of Public Administration, Milosevic said that it was too early to assess whether with its formation will bring about substantially new approach in the implementation of public administration reform. For this to happen, it is important that the work of this institution does not solely consist of tasks performed by the former directorates of the Ministry of Interior and Ministry for Information Society and Telecommunications.

A positive development is that it is envisaged for more employees to be tasked with development and coordination of public administration reform both on national and local levels. However, no ministry alone can carry out such a demanding reform. It is therefore important that the coordination of the various institutions is more effective than it has been so far – she noted.

Montenegro now has a single body to manage this reform, after a long time. However, representatives of the NGO sector are not in the Council, which is also not in favor of a more open approach in the implementation of reforms. This does not comply with key standards of good governance, which are defined by the European Principles Of Public Administration – she noted.

Interview has been republished from the website of Dan Online