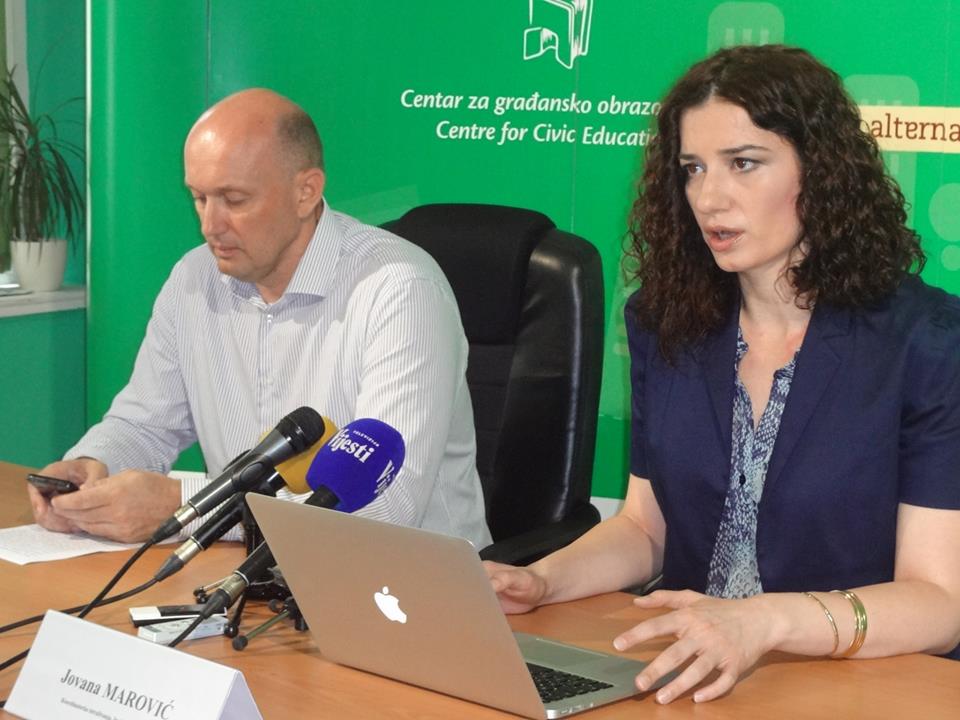 Boris Marić, Senior Legal Advisor at Centre for Civic Education (CCE), reminded that the analysis was prepared within the framework of the project “Corruption at the Local Level – Zero Tolerance”, which aims to strengthen the role of civil society organizations, the local self-governments and the competent state authorities in policy development, as well as in monitoring and implementation of the campaigns for reduction of corruption in local communities in Montenegro. He also emphasized that 6 policy studies dealing with the key risks for corruption at the local level in the areas of public procurement, employment, public-private partnerships, urban planning, political corruption, and performance and abilities of local parliaments, emerged as a result of implementation of this project. “Today’s topic – employment, with special emphasis on surplus of employees in the local self-governments, needs to be connected with the political influence on the employment system and the emergence of political corruption aiming to maintain the position of power at the local level.”

Research Coordinator at Institute Alternative (IA), Jovana Marović, pointed out to the problems identified at the local level, namely the surplus of employees, inadequate planning of human resources, lack of skilled and qualified personnel, lack of motivation of employees, party-influenced recruitment, lack of transparency with regard to recruitment procedures, as well as lack of formal prerequisites for implementation of the Law on Civil Servants and State Employees at the local level. Marović stated that determining the actual number of employees in the local self-governments is problematic, but also that it is certain that employment at the local level intensifies in the pre-election period, regardless of the surplus of employees which already exists.

“By guaranteeing job positions votes are “bought”, and electoral victory and social peace secured. This has a negative impact on financial stability of the local self-governments. The system of local finances in Montenegro is continuously burdened with numerous problems, the most significant ones being the decrease in current income, growth of overdue obligations and credit loans, as well as high budget deficit.” In addition to the local self-governments, Marović called attention to the problem of public enterprises and institutions with twice as many employees, as in the case of Bar, Budva, Kotor, Podgorica, Pljevlja and Tivat.

According to the data of the Ministry of Finance, at the end of the first quarter of 2014, the total debt of the local self-governments amounted to 171.05 million or 4.86% of the estimated GDP for 2014, while the total overdue obligations of the municipalities, March 2014 inclusive, added up to 108.61 million. The projected savings after rationalization of the number of employees in all municipalities, in accordance with the Plan of Internal Reorganization, should amount to 9,388,476.33 Euros by the end of 2016.

The analysis further indicates to the inability of determining the optimum number of employees in the municipalities, which is directly related to poor human resources planning. The Plan of Internal Reorganization of the Public Sector, which envisioned drafting the necessary analyses on the optimal number of employees a year after the adoption of the document which offers projection of rationalization, does not contribute to the improvement of the planning process.

The analysis “Employment in Montenegrin Municipalities – Merit Based or Party Recruitment?” was prepared within the framework of the project “Corruption at the Local Level – Zero Tolerance”, implemented by Centre for Civic Education (CCE), in cooperation with Institute Alternative (IA), NGO Nada, and NGO Bonum. The project is supported by the European Union through the EU Delegation to Montenegro and IPA 2011, and co-financed by the Royal Norwegian Embassy.