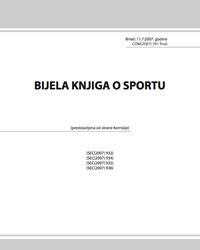 With the partial support of the Government’s Commission for the allocation of the part of revenues from the games of chance, the Institute Alternative implemented the project “Corruption and Organized Crime in sport” in the second half of 2012.

The project aims to contribute to the fight against corruption and organized crime in sports in Montenegro in accordance with standards and best practices of the European Union and the Council of Europe.

The project consisted of two activities: the research which has resulted with analysis of the risks of corruption in sport in Montenegro and with the translation, printing of the White Paper on Sport of the European Commission (White Paper on Sports), which is distributed to decision-makers in the field of sports in Montenegro.

White Paper on Sport is an initiative of the European Commission, which is for the first time dealing with issues of sport in the EU in a comprehensive manner. Its aim is to give strategic orientation on the role of sport in Europe, to encourage debate on specific issues, to improve visibility in the sports policy making in the EU, as well as to raise public awareness of the needs and characteristics of the sector. The initiative aims at illustrating the importance of issues such as the harmonization of legislation on sport in the EU, and to establish basis for the further development of activities related to the development of sport at EU level.