Whether mass, post-election hirings in public administration has spiraled out of control, whether the incumbent Government is using the transition period to reward the loyal ones by hiring them in public administration and whether the new Government can review such decisions – these were just some of the topics of TV show Reflektor, broadcasted on TV Vijesti, with our Milena Muk, a policy researcher at Institute Alternative, as a guest of the show. 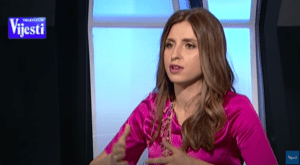 Continuity of mass hirings in public administration is a reality, the main resource and the basic mechanism used for surviving of incumbent Government, said Muk, commenting the information about 700 recently hired employees in public administration. However, she emphasizes that not every employment in this, transitional period of Government is a priori illegal or unjustified, and that in some of the sectors there probably are justified personnel needs, but that some of the legal vaguenesses are creating fears that the current Government might will conduct abuses within formal legal framework.

Despite many appeals of Institute Alternative that the Administrative Inspection must work to prevent such abuses, the role of this institution has been unjustly neglected, while on the other hand, mass hirings has no been prevented neither by the legal framework because staffing is not based on needs and plans.

”Public Sector Optimisation Plan showed the simulation of reforms. Plan has not been implemented in a way that optimises public administration and makes it functional to the extent that it delivers services to citizens in a sufficiently effective manner”, said Muk, adding that it is worrying that instead of reducing staff at central level, current Government presents slowdown of employment growth as a success.

Referring to the upcoming period of constituting the Government, Muk warned during the TV show that the new majority must act more responsibly and use only those institutes at its disposal in personnel management, in order to avoid repeating paying millions of euros of citizens money for lawsuits, which are the most brutal proof of poor management of public administration. She reminded that, although unfortunately they have not been applied often so far, there are institutes in system created for evaluation of work performance, determining disciplinary, material and even criminal responsibility for all those in public administration who do not do their job properly.

Beside our Milena Muk, the guests of the show broadcasted on October 6, 2020 were also Goran Danilović from United Montenegro party, Boris Marić from NGO Center for Civic Liberties and Rade Milošević from URA civic movement.

You can watch the entire TV show Reflektor here: