Montenegro lacks a systematic approach to the protection of victims of crime, and we can not criticise individual links and parts within the system, but we need to create a system in which the victim will feel protected all the time, from the moment it is reported to the end of the proceedings.

This was concluded at the panel discussion of the Institute Alternative (IA) ”Protection of Victims of Crime – Mechanisms and Practices in Montenegro”. The panel was organised on the European Day of Victims of Crime – February 22. The event was organised within the regional project Radar of Organised Crime in the Western Balkans, supported by the Embassy of the Kingdom of the Netherlands in Belgrade, the Embassy of the Kingdom of Norway in Belgrade, and the Balkan Trust for Democracy.

Dragana Jaćimović from the Institute Alternative (IA) said that it is estimated that every seventh European is a victim of crime. Jaćimović also pointed out that there are no official statistics on the total number of victims of crime in Montenegro, and that data for individual crimes can be found in the reports in the work of the Ministry of the Interior.

Bojan Božović, State Secretary at the Ministry of Justice, Human and Minority Rights, referring to the United Nations Declaration on Basic Principles of Justice for Victims of Crime and Abuse of Power, said the fact that the Declaration was adopted in 1985 shows there was no readiness in the world for it to be a binding legal act, but only a legal source which represents a type of recommendation. There is also an issue in Montenegro with the implementation of these norms within the system. “Despite numerous provisions, there is still a lack of systematic approach, and certain areas are not sufficiently regulated, but there are overlaps in some norms,” Božović added.

Božović also said that it is necessary to establish a specialised national service that will aim to support victims from the earliest phase of the procedure. Special attention should be paid to media reporting, where we must continue to work, especially when it comes to protection of the privacy of victims. As main issues within the existing system, Božović points out the lack of special rooms in which the victim would stay separately from the perpetrator, as well as the frequent re-examination of the victims.

Maja Raičević, executive director of the Women’s Rights Center, said that Montenegrin legal framework is quite solid, but that the implementation in practice depends on the sensitivity of people who come into direct contact with victims, adding that “we often forget that victims of crime are victims of our environment and persons who have been exposed to a particular trauma that may affect their ability to access justice.”

As a positive example, Raičević points out one misdemeanour judge recently enabled the victim to give a statement without the presence of the accused. This was of exceptional importance, because the victim gave the statement without fear and pressure, mentioning that these cases are not often. 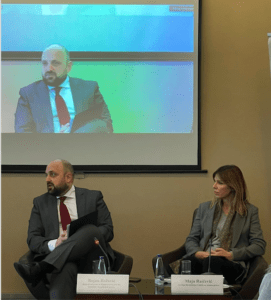 On the journalist question whether judges who impose penalties under the minimum can be held accountable, Božović said that the sanctions indisputably were too low, but they are aware of the bad practice, the amendments of the Criminal Code and the minimum sanction threshold are adopted. In that way, they would succeed in reaching more adequate punishments. Božović added that through amendments of the Law on Judicial Council they would touch upon the disciplinary responsibility of the judges, but it is also important to remind on the multistage procedure as it is an important instrument in the protection of the victims.

In connection to the question, Raičević said that we rarely have adequate mechanisms when it comes to the responsibility of the judges, but also problematized the qualification of the offences by the prosecutors. Official statistics show there are more than 2000 offences, and only 250 crimes for domestic violence.

Raičević points out: “Whenever we have officials, we can see the punishments, even for more serious violence do not go more than six months. In this way, they can continue working in the service what is seen as a silent agreement.”

Answering the journalist question in connection with the cases in which the abusers were sentenced to house arrest with the victim, Božović said that it is exactly one of the reasons to change Criminal Code, not to give the possibility to the perpetrators this kind of punishment. Raičević considers, in this way the victim is punished. 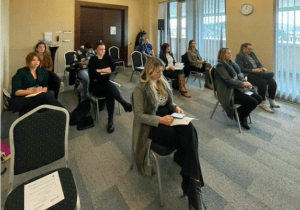 Sonja Perišić Bigović from the Department for Combating Trafficking in Human Beings within the Ministry of the Interior stated that we did not do enough so the victim can feel protected and safe. Perišić Bigović supports the initiative to amend the Criminal Code, she also considers that aggravating circumstances should not be taken into account in serious acts of trafficking human beings.

Snežana Armenko, Deputy of the Protector of Human Rights and Freedoms, stated that everyone with own actions shall wake dormant rights and that the rights are not exhausted in norming, but it makes sense when the victim can consume that right in the system. Armenko points out that for the victim aspect the victim itself must know which remedies are at disposal, pointing out to the constitutional complaint.

It is concluded that it is needed to enable the complete system to function because if one part is not functioning, high sanctions are in vain. It is pointed out on the importance of social institutions, psycho-social support, as well as the witness services/injured and victim support services in courts, and that they need to be established differently from the existing one.

The event was part of the project Radar of Organised Crime in the Western Balkans (WB-OCR), which presents the initiative of the civil society created as the answer to the growing damage inflicted on the citizens of the Western Balkans by organised crime. The work is supported by the Embassy of the Kingdom of the Netherlands in Belgrade, the Embassy of the Kingdom of Norway in Belgrade, and the Balkan Trust for Democracy.

The video of the panel discussion can be seen here: