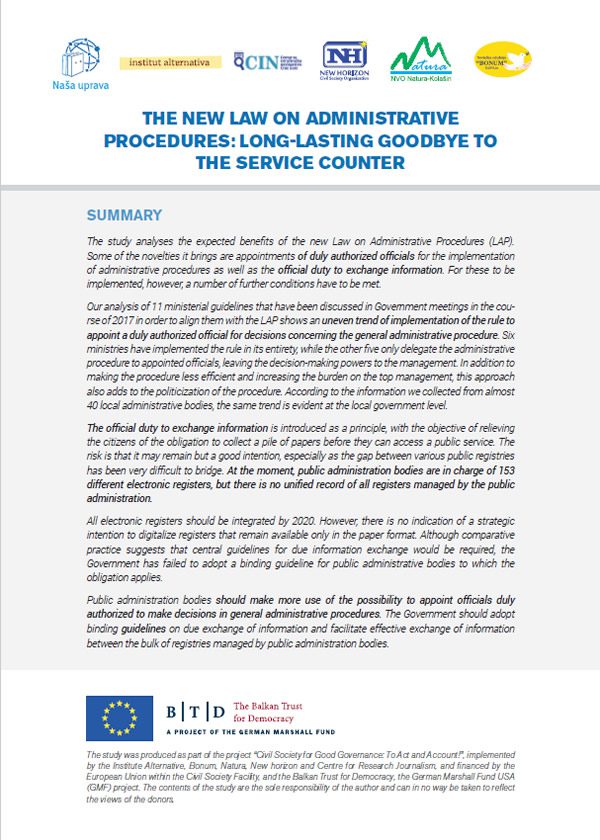 The study analyses the expected benefits of the new Law on Administrative Procedures (LAP). Some of the novelties it brings are appointments of duly authorized officials for the implementation of administrative procedures as well as the official duty to exchange information. For these to be implemented, however, a number of further conditions have to be met.

Our analysis of 11 ministerial guidelines that have been discussed in Government meetings in the course of 2017 in order to align them with the LAP shows an uneven trend of implementation of the rule to appoint a duly authorized official for decisions concerning the general administrative procedure. Six ministries have implemented the rule in its entirety, while the other five only delegate the administrative procedure to appointed officials, leaving the decision-making powers to the management. In addition to making the procedure less efficient and increasing the burden on the top management, this approach also adds to the politicization of the procedure. According to the information we collected from almost 40 local administrative bodies, the same trend is evident at the local government level.

The official duty to exchange information is introduced as a principle, with the objective of relieving the citizens of the obligation to collect a pile of papers before they can access a public service. The risk is that it may remain but a good intention, especially as the gap between various public registries has been very difficult to bridge. At the moment, public administration bodies are in charge of 153 different electronic registers, but there is no unified record of all registers managed by the public administration.

All electronic registers should be integrated by 2020. However, there is no indication of a strategic intention to digitalize registers that remain available only in the paper format. Although comparative practice suggests that central guidelines for due information exchange would be required, the Government has failed to adopt a binding guideline for public administrative bodies to which the obligation applies.

The study was produced as part of the project “Civil Society for Good Governance: To Act and Account!”, implemented by the Institute Alternative, Bonum, Natura, New horizon and Centre for Research Journalism, and financed by the European Union within the Civil Society Facility, and the Balkan Trust for Democracy, the German Marshall Fund USA (GMF) project. The contents of the study are the sole responsibility of the author and can in no way be taken to reflect the views of the donors.