Skip to content
Institute Alternative » Publications » The Assessment of Legal Framework and Practice in the Implementation of Certain Control Mechanisms of the Parliament of Montenegro: Consultative hearing, control hearing and parliamentary inquiry 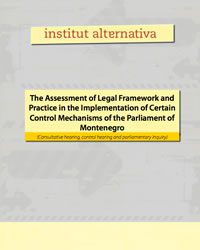 This document analyzes three control mechanisms envisaged in the Constitution of Montenegro and in the Rules of Procedure of the Parliament of Montenegro: control hearing, consultative hearing, and parliamentary inquiry.

Interviews were the methodological tool used in order to obtain information on the attitudes of the key actors in the process of exercising the control function. This envisaged the creation of three separate questionnaires:

a) for Representatives and members of parliamentary parties in Montenegro;

b) for representatives of institutions that were subject to parliamentary control;

c) for journalists who reported on the parliamentary practice and representatives of NGOs dealing with the functioning of the Parliament.

The findings presented in this document are the result of a comprehensive study of the legal framework and practice in Montenegro related to parliamentary control and the implementation of parliamentary mechanisms. The data received from the Parliament’s Service and the organs of state administration were obtained through requests for free access to information.

This document entails some comparative insights based on the analysis of the legal framework and pratice of certain countries from the region and the EU. During the process of research a thorough analysis of legal frameworks has been undertaken (Constitutions and legislative procedures in Parliaments), and coupled with the study of parliamentary practice in these countries. Institute Alternative organized a roundtable, whereby the draft version of this document was debated. Representatives of political parties, non-governmental organizations and media took part at this roundtable. The aims of this project are to enhance the quality of the legal framework and practice in the implementation of control mechanisms of the Parliament of Montenegro, to open a public debate on these issues, and to offer recommendations for improvement.