Ambient during preparations of upcoming elections, political crisis and events that occurred in Budva, the Law on Freedom of Religion, ‘’Lists’’ affair – these are just some of the topics our Stevo Muk discussed in the TV show Načisto with Petar Komnenić, on TV Vijesti. Daliborka Uljarević (CCE) and Milica Kovačević (CDT) also participated in TV show broadcasted on June 18, 2020.

‘’Government is trying to resolve disputes, which in democratic societies are being solved in courts, by sending police units together with Administrative Inspection, not to file a document, but to physically push into a building a new establishment and those who Government considers legitimate and legal representatives of the electoral will of citizens in this municipality’’, said Muk, referring to the political crisis in Budva. He also said that this absurd system led to contradictions, and have a free mandate to the MP and local councilor, while at the same time gave citizens the opportunity to vote for them from closed lists.

Muk considers that it would be appropriate if we could separate Democratic Party of Socialists (DPS) as a political party and Government as constitutional institution which does it job in accordance with the laws, but he concludes that these two sides have grown together and he sees it as a source of all issues.

‘’When we talk about captured institutions, we talk about how political will and behavior of all bodies – both executive and judicial branch, prosecution and police, are being created in the main board of DPS. Unfortunately, there are few people who think for themselves, but they already accepted the principle that belongs to the worst systems and implies – stop thinking and start following the commander, Milo Đukanović, the father of the nation. The problem is that political-institutional networks have grown together to such extent that even the ones in Constitutional Court are waiting for a sign from his cabinet, and if the sign comes they will deal with the Law on Freedom of Religion or some other law, and if not, they will try to find out what he really thinks about it’’, Muk said.

Electoral conditions are the worst so far, and this will not change due to the current general mistrust among opposition parties and prevents them from having a minimum of dialogue, allowing the DPS to organize elections under any conditions. As a problem Muk also sees the inability of opposition parties to find the lowest common denominator, in order to come up with a clear initiative and key demands regarding the election conditions. Considering this, he estimates that for the boycott of the elections there is also issue of lack of unity of all opposition parties, and that the boycott should be seen as a way for putting pressure on the Government, and not as a goal that will express a moral cry over bad election conditions.

As he stated, more worrying than the content of non-paper, which increasingly forms the image of Montenegro’s democratic backslidings, is the reaction of the authorities, which instead of facing the identifies issues – extracts those sentences from this document that seem positive and triumphantly presents them to the public.

The election of Branislav Mićunović as the representative of the NGO sector in the Council of RTV Podgorica, Muk comments as an element on the way to establishing another party television to be paid by citizens, with one clear goal – to promote one political party and one agenda, while marginalizing others from public debate.

‘’This Government will not replace its power for reforms, because they know that with independent institutions and an independent public service, it will no longer be in power’’, Muk concluded.

How to Revive the Prosecution and Stop Abuses? – TV Sh... 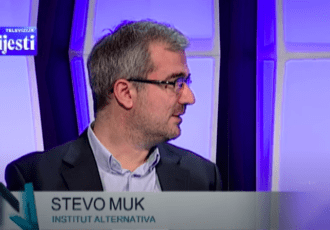