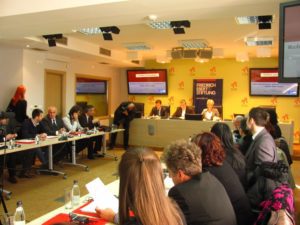 “The permanent expert body for implementation of the state administration reform is need, in order for this process to be more successful”, Jovana Marovic, research coordinator at the Institute Alternative (IA), said at the round table “State Administration Reform: Where Do We Stand?”.

Marovic pinpointed the problem of deficit of employees in certain ministries and problem of suffice of employees in other ministries. She urged authorities to make an analysis, which would contain precise estimation of the administration’s scope of the work, number and professional profiles of people which should be recruited for certain sectors, as well as estimated mid-term costs of conducting the necessary work. 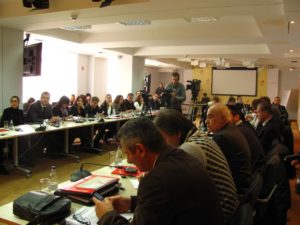 the reform, given the absence of adequate institutional framework for management of the process.

Boris Marić, senior legal advisor at the Centre for Civic Education, asked whether the state administration reform was “unfulfilled dream”.

Stevo Muk, president of the Managing Board of the IA, reminded during his introductory speech that, as a part of the so far efforts of reforming the country’s state administration, the two strategic documents have been adopted, legal and institutional frameworks for implementation of those strategies changed, as well as the mere structure of the state apparatus.

“However, challenges are still numerous. State administration is insufficiently organized, efficient and professionalized. As such, it represents an obstacle to the country’s faster integration into the EU”, Muk added. 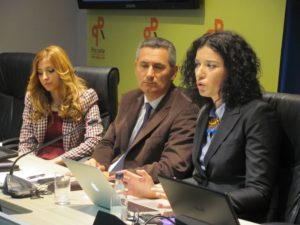 During discussion, he pinpointed the insufficient separation of powers between Ministry of Finance and Ministry of Interior Affairs in coordination of state administration reform and suggested the need for a more close definition of these institutions’ role.

Olaf Poeschke, deputy ambassador of the Federal Republic of Germany, said that the introduction of merit-based system into the Montenegro’s civil service was one of the key priorities of the entire reform.

Representatives of the Ministry of Interior Affairs – Jadranka Vojinovic, the state secretary in the Ministry, and Veselin Vukcevic, the deputy minister, also took part at the round table.

They represented the reform results and drew attention to the Plan of reorganization of public sector, which the Government adopted in July 2013, and presented to the public on Wednesday, just before the round table.

Vojinovic said that the decrease of number of employees, envisaged by this strategic document, does not necessarily entail layoffs.

“Retirement, termination by mutual agreement, and termination of employment on the basis of disciplinary responsibility are also means of decreasing the number of employees”, she told.

Representatives of the Parliamentary Committee for Political System, Judiciary and Administration were also panelists at the round table.

Snežana Jonica, the deputy president of the Committee, highlighted the 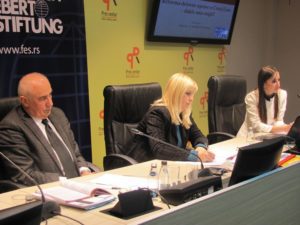 problem of undated resignations, which Milo Djukanovic, at the time when he was a candidate for the prime minister, ordered to the heads of authorities, as one of the challenges in depoliticisation of state administration.

“They were not ordered by the prime minister, but by the candidate tasked with composing the new government, thus by the president of the Democratic Party of Socialists”, she said.

Rifat Rastoder, president of the working body, offered an overview of the parliamentary oversight of state administration reform and highlighted increase in usage of control mechanisms from the side of the MPs.

Round table was held with the support of Friedrich Ebert Stiftung.