Dina Bajramspahić, our public policy researcher, responded to Vijesti’s question about whether we need the Law on Parliament and Law on Government:

The relation between the Parliament and Government is insufficiently regulated 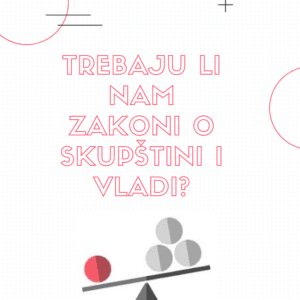 and for almost twelve years since independence, the procedural issues of the mechanisms envisaged by the Constitution are not adequately elaborated. In the absence of the Law, the Parliament regulates its communication with Government with its internal act, the Rulebook, which is not binding for the Government to a sufficient extent. This leads to practices, for example, that ministries do not take into account the MPs’ questions, MPs’ requests for the access to information, conclusions of the Parliament and the conclusions of working bodies, which is absolutely unacceptable and inconceivable in the state of parliamentary democracy. Reporting on conclusions is not regulated by any act, which significantly diminishes the influence of the Parliament and the boards.

The Law on Parliament and the Law on Government are necessary, but these laws would not solve all the issues. This is best demonstrated by the fact that there is a Law on Parliamentary Oversight in the area of Security and Defence that is applied superficially and without excessive contribution to solving issues in this sector.

The situation regarding the oversight function of the Parliament today is such that the Government, rightfully, has no reason to take the Parliament seriously, nor to fearfully prepare reports on its work in various areas. However, not only is the oversight function unsatisfactory, but also the legislative: many Governments’ laws pass without amendments and without questions. The Parliament should not allow itself to become only a rubberstamp that has no influence in so many areas overwhelmed with problems.

To be completely clear: no one expects from the ruling parliamentary parties to topple the Government and Governments’ laws. However, the MP’s of the ruling parties must justify their salaries, i.e. find ways to contribute to solving problems, have constructive initiatives, ideas, suggestions, initiate amendments of laws that are not functional in practice, initiate thematic discussions on issues that are of importance to citizens, etc, thereby preserving dignity for the highest state institution. Otherwise, the Parliament will have no purpose. Only in countries of undeveloped democracy the Parliament retains itself at the level of the voting machine, instead of encouraging the government for better work and greater accountability. That is the responsibility of the MP’s that represent the majority in Parliament – both in the presence and in the absence of the opposition – since the opposition does not have the majority to decide anyway.

The original text ”Montenegro is the only one in region that does not have the Law on the Government and the Parliament – The Government can play games with MP’s” is available here.