In 2014, state authorities have spent 52 994 714, 56 euro. The Ministry of Sustainable Development and Tourism had the largest completed budget for public procurement in 2014 – 23 278 015, 51 euro and The Secretariat for Development Projects had the lowest one – 16 740,60 euro. The total amount of 14 state authorities have violated the percentage of use of direct agreement prescribed by the Law, led by the Directorate of Youth and Sports, which has used this procedure for all the procurement realised during last year. The following authorities have also realised the extremely high percentage of use of direct agreement: Institute for Hydrometeorology and Seismology (41,24%), Intellectual Property Office of Montenegro (35,48%), State Archives of Montenegro (34,15%), Ministry of Foreign Affairs and European Integration (30,07%). 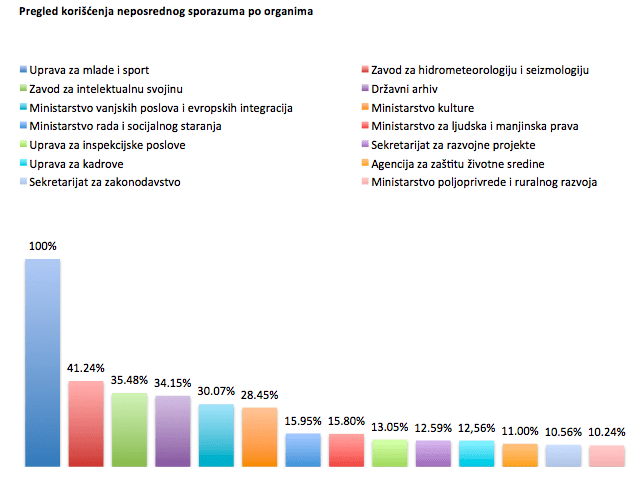 The problem of unrealistic planning of the public procurement budget is also ubiquitous in state authorities. According to the data presented in individual reports on public procurement, the completed budget of only three municipalities is in accordance with the planned budget for 2014 – Ministry of Foreign Affairs and European Integration, Ministry of Labor and Social Welfare and Bureau of Metrology. Still, by examining the reports delivered by these institutions to the Institute alternative, i.e. by summing the amounts from the forms A, B and C which give an overview of the procurement realised by the open procedure, the shopping method and the direct agreement, we see that the total sum differs from the planned one. The total amount of sixteen state authorities has been changing the public procurement plan during the year. The Ministry of Finance has changed the public procurement plan nine times, of which the last change made has increased the budget for almost half of a million, even though that amount hasn’t been spent by the end of the year. The public procurement plans of two institutions are not even available – The Directorate of Youth and Sports and the Institute for Social and Child Protection.

The data on public procurement in state authorities in 2014 was gained on the basis of the request for free access to information sent to all state authorities obliged to apply the Law on Public Procurement, 33 of them. This information doesn’t include the data for the Directorate for Hydrocarbons, considering that we weren’t able to find the contact information of this newly established organ. Even three months after sending the request, The Ministry of Economy and the Ministry of Education have not delivered their annual reports on public procurement, violating in that way the Law on Free Access to Information. The Public Procurement Administration and The Statistical Office of Montenegro have made a resolution with incorrectly and incompletely established facts. Namely, from the Statistical Office we’ve been informed that the individual reports of the contracting authorities are available at the annual report on public procurement, which, according to the Law, should be published until the end of May, which doesn’t correspond with the facts and could be determined by examining the last years’ reports. The Public Procurement Administration in their response have also referred to the annual report on public procurement, even though it is obligated to prepare the individual report on conducted procurement, which is clear from the budget established for this institution in the Law on Budget of Montenegro for 2014. Also, during our research on the attitudes of the contracting authorities in January this year, we have been informed from the Commission for the Control of Public Procurement Procedures that the Public Procurement Administration manages procurement for them. Because of these resolutions and the silence of the administration, we have submitted the complaint against these four institutions to the Agency for Protection of Personal Data and Free Access to Information, but this body has not decided on them yet. The Ministry of Transport and Maritime Affairs has made the resolution approving the access to information, but even after costs payment, we still have not received the report.

Full information on public procurement in state authorities can be found here (only in Montenegrin).

The research is conducted within the project “Civil Society and Citizens against Corruption in Public Procurement”, which is implemented by the Institute Alternative with the support of the Embassy of the Kingdom of Netherlands. The activities aim at strengthening the cooperation between state and non-state actors in the joint efforts in identifying irregularities in public procurement and formulating the recommendations for improvement.