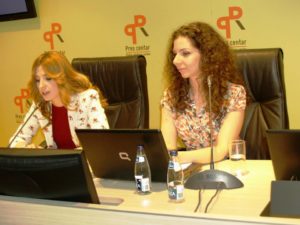 Not all the legal and institutional preconditions for the implementation of the new Law on Civil Servants and Employees are met, while the transparency of its application is also not satisfactory, Institute alternative (IA) argues.

On Monday, IA presented its first quarterly monitoring report on the Recruitment and Promotion in state bodies, in line with the new Law on Civil Servants and Employees, whose implementation was launched on January 1.
Until January 1, not all the legal preconditions for the implementation of the new Law were fulfilled. During the seventeen months transition period between entering into force and start of the Law’s implementation, only 4 out of 17 envisaged by-laws were adopted.Only three more acts were adopted by April 1.

“Delays in adoption of the acts for the implementation of the new Law had a negative impact on consistency of the application of the new rules regulating recruitment and promotion in state bodies”, Milena Janketic, one of the authors of the report, said.

She stressed that the Rulebook on the content and manner of keeping the Central Human Resources Record has not been adopted in the reporting period, while the lack of data within this information system was alarming.
The number of civil servants and state employees in the state administration bodies of Montenegro, defined by the Decree on Organization and Manner of Work of State Administration, according to the Central Human Resources Record, was 3739 as of April 1, although it is estimated that the total number of state employees and civil servants is approximately 10,500.

The data about the rest of 7,000 state administration’s employees are thus missing from the Central Human Resources Record, report states.

“Furthermore, only 6 bodies submitted the data about the grades of their employees into the Central Human Resources Record by April 1, 2013”, Janketic said, emphasizing that this represents an obstacle in the implementation of the Law, because the insight into the candidates skills should be partially based also on the insight into their grades.
Only 18 vacancies for job in state administration were announced in the reporting period. Still, excluding the appointment of heads of state administration bodies, only four candidates had gone through the newly prescribed procedures of testing the candidates’ skills, based on two separate vacancies.

Hence, the IA argues, it is too early for bringing conclusions about the consistency of the implementation of the Law’s new general rule, which prescribes candidates with the best abilities, expert and working skills, get job in state administration.

Yet, findings of the monitoring point to the lack of transparency in the implementation of the law.
“In other words, the Law is being interpreted in a way in which the realization of internal vacancies within one state body is being assigned to the state body itself instead to the Human Resources Management Authority which should have a central role in realization of all the vacancies”, Milena Milosevic, public policy researched in the IA, said.
Such practice raises doubt that, in cases of internal vacancies within state bodies, candidates’ abilities are not being tested at all.

Therefore, with an aim of enhancing the procedures for recruitment and promotion in state administration, the IA suggests the Human Resources Management Authority and state bodies to ensure the consistent application of legal provisions which clearly regulate competences of the authorities during realization of vacancies, including the procedures of testing candidates’ abilities.

At the Wednesday’s conference the IA announced that it will continue to monitor recruitment and promotion in state administration and to publish monitoring reports, with the support of Friedrich Ebert Fondation.