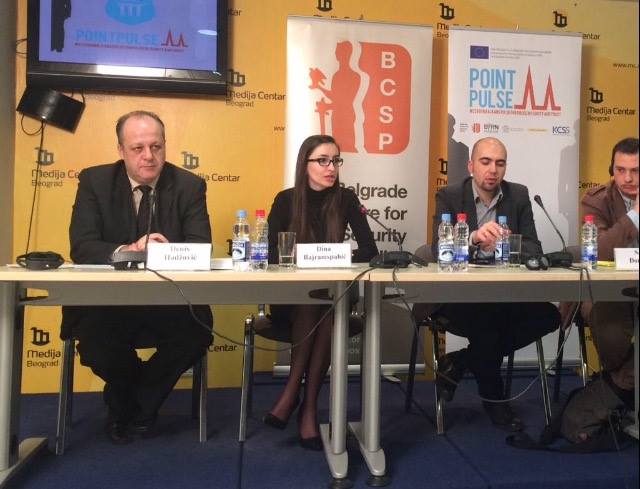 Human resources management, weak police internal control and the politicization of the police are common regional problems and solving them is fundamental for strengthening police integrity, participants concluded at the panel discussion on police accountability in the Western Balkans.

Police in the region are facing similar problems such as the politicization of the police or corruption in employment, it was pointed out at the debate in the Media Centre in Belgrade, organized by the regional network of civil society organizations POINTPULSE on Friday, February 27th 2015.

The main motive behind creating the regional POINTPULSE network is the fact that the trust in the police is below the world average of 60% to 90%, as emphasized by Saša Đorđević, the researcher from Belgrade Center for Security Policy. Trust in the Serbian police is 35%, which is a 5% increase when compared to the previous year, but less than in 2011 and 2012. In Bosnia and Herzegovina the trust in this institution is 55%, in Montenegro 44% and in Kosovo it is 43%. This is all below the world average, explained Đorđević.

The police efficiency is not only based on statistics but also on citizens’ trust in the police and whether they feel protected, which together raises the question of the police accountability, said Đorđević and pointed out that the newly announced Law on Police in Serbia should solve some of the problems.

“Draft Law on Police has its good and bad sides. Human resource management is improved because the specific criteria for promotion are listed and competition for jobs is provided. It is not good that the Minister of Interior continues to appoint and dismiss Heads of regional police departments. If so remains, the politicization of the police will continue to be a problem”, concluded Đorđević.

“Citizens in Bosnia and Herzegovina have quite a lot of trust in the Police, but only 20-25% of citizens have confidence in the judiciary. The situation with the Police is satisfying due to the complex constitutional structure in which work 22 police departments that are quite independent”, said Denis Hadžović, Secretary general of the Centre for Security Studies in Sarajevo.

Hadžović said that the laws regulating this field are good, but that problems are faced during its implementation. In the past year, 67% of citizens have witnessed bribing of traffic police, while 57% of them believe that there is corruption in employment, and that the most corrupted part of the police in Bosnia and Herzegovina are director of the police or minister, underlined Hadžović.

Majority of Montenegrin citizens,72 %, believe that corruption is ubiquitous, says Dina Bajramspahić, the researcher of the Institute Alternative from Podgorica.

“It is well known that corruption in Montenegro is one of the biggest problems, as well as the relation between organized crime and political structures. The problem of the police politicization is also large because the state is the biggest employer in the country, where recruiting is done without merit criteria and with frequent and unexplained shifts. Because of that, it is necessary to strengthen the control of the property cards of police officers”, underlined Bajramspahić. Another policing problem in Montenegro is the large number of police officers. The EU Member States employ an average of 300 police officers per 100,000 citizens, while in Montenegro this number is 808.

Bajramspahić emphasized that the particularly problematic area is the fact that Police in Montenegro is not encouraged for the fight against corruption, considering the fact that the persons behind the attacks on the police officers have not been discovered

Plator Avdiu, researcher from the Kosovo Center for Security Studies in 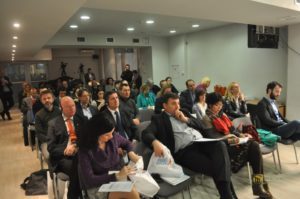 Pristina, believes that it is necessary to strengthen the fight against the corruption in the Police, especially regarding the public procurement where the money is being spent outside of legal procedures and regulations.

“The politicization, nepotism and public procurement are three main risks of corruption in the police in Kosovo,” said Avdiu. He added that the Kosovo police are the youngest institution in Europe, since it was developed only in the last 15 years. However, the Police forces are among the oldest, if the average age of police officers is taken into account. This problem should be solved through the adoption of the new Law on Early Retirement of Police Officers, which would enable the police forces of Kosovo to rejuvenate itself through the retirement of about 1,000 police officers from the service and employing the same number of younger ones, said Avdiu.

The problem that the researchers have noticed as common is the fact that the state is not encouraging the police to responsibly do their part of work when it comes to the fight against the corruption.