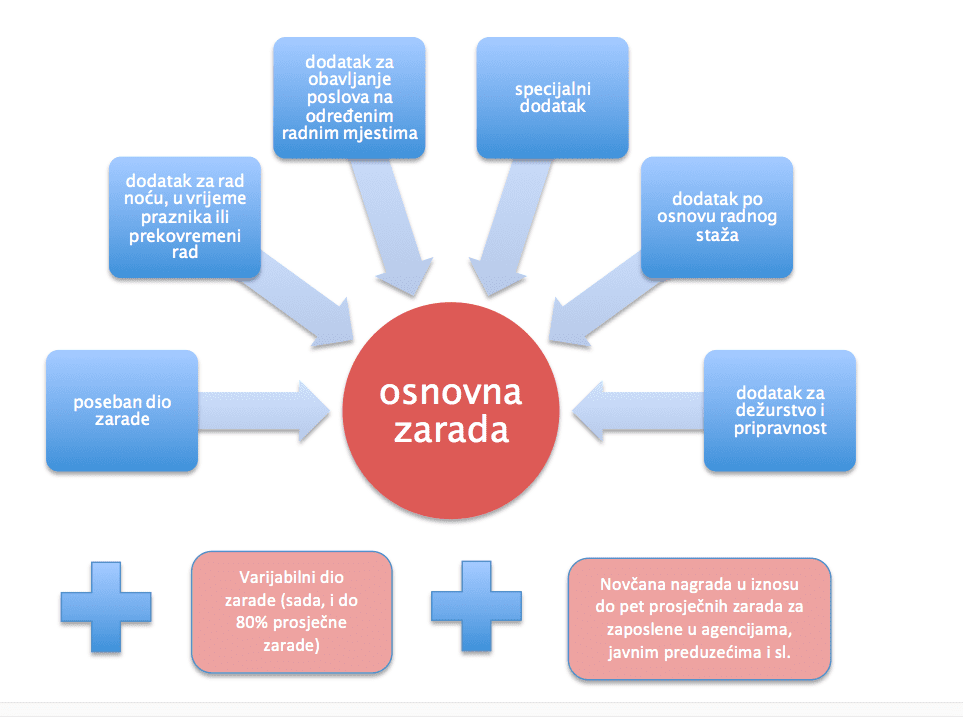 The new Government Draft Law is unlikely to increase transparency of wages in public sector, considering the complex income structure and numerous data that opens the possibility of misuse.

The Draft Law on Wages of Public Sector Employees entered the Parliamentary procedure at the very end of last year, but not in a form that would eradicate the lack of wages policy.

What is interesting is that with the new Draft Law entering the Parliamentary procedure a list of exceptions to its implementation is expanded. Namely, the Law does not cover the employees at successful ‘’public companies”. Although the right to severance pay on retirement of state employees is reduced from two to one year, the Draft Law will not contribute to greater transparency.

The present chart shows that besides basic income, according to this formulated Draft, the employees have the right to various bonuses, while there is no clear explanation for an additional bonus on wages for employees with specific job positions dealing with organised crime, corruption, money laundering, terrorism and war crimes. What’s even more obscure is the difference between this bonus and other kinds of bonuses on basic income that is being distributed for certain positions.

Numerous confusions may occur in practice regarding the specificity of the subjects or specificity of job positions. It will all have a negative impact on transparency, equity and equality of implementation of policy wages of public sector employees.

At the Institute Alternative, we consider that it is necessary to motivate employees in positions dealing with the fight against corruption and organised crime. However, they can be motivated using more legally more precise and predictable channels, such as through appropriate categorisation of job groups and coefficients, and not using mechanisms such as special bonuses, which represent an additional possibility of arbitrary increase of basic income. Also, what is interesting is that with the adoption of this version, legal solutions adopted recently would be annulled. Different coefficients are foreseen for the Protector of Human Rights and Freedoms and the Agency for Prevention of Corruption, despite the fact that Law on Anti-Corruption foresees equal wage for all heads of state authorities.

We have also insisted that the new Law deals with the variable part of the salary in a more adequate manner, which are salary bonuses intended for employees with excellent results and quality of work and which represent up to 80% of average salary. Namely, the quality of work should be evaluated with relation to existing regulation on evaluation of civil servants, in order to prevent arbitrariness in the distribution of variable parts of wages.

The lack of transparency in distribution of variable parts of salaries has also been criticised by SIGMA, the joint initiative of the European Commission and the OECD. The Report on the Principles of Public Administration in Montenegro, published on 13th of November by SIGMA, criticises the imprecision of the legal framework when it comes to variables by head of state authority or minister.

According to the data of the Institute Alternative, obtained within the project ‘’State Administration in Montenegro: Equal for all’’, supported by the Embassy of the USA in Podgorica, during 2014, the state authorities spent around 1.466 million EUR for variable parts of wages for employees, However, the key issue that we will follow up is the transparency of variable part of as well as the equity of its distribution among state authorities, as well as to what extent all employees are familiar with the criteria based on which their colleagues achieve excellent results and are rewarded for it. This is the only way the merit-based rewarding system can be implemented, and not based on subjective estimation of the heads of institution, who are not immediate supervisors of most of employees in public sector.

If adopted, the new Law will abolish the wage grade within which the ranks of civil servants and state employees are categorised. By doing do, the possibility of their promotion is abolished, which has so far only been possible in the higher wage grade based on two subsequent excellent work appraisal. This additionally confirms that it is necessary to analyse salaries within wider context of overall public administration reform and civil service system started in 2003. However, due to the lack of coordination and clear vision, as the European Commission stated in the recent report, Montenegro is only ‘’moderately ready’’ in this aspect.