Skip to content
Institute Alternative » Accountable public finances » Press Release: Cost of Action Plans for Chapter 23 and 24 must be in the Budget

Bearing in mind that the process of next year’s budget planning is ongoing, we urge competent authorities to take into account the resources needed to implement measures planned to be realized in 2015, as envisaged by the Action Plans for Chapters 23 and 24. This is especially important if we take into account that the most significant portion of the funds from both Action Plans is planned to be spent in the following year.

According to the Conclusion of the Government, all consumer units shall submit their budget plans for 2015 to the Ministry of Finance by July 31, 2014. These budget plans must be in conformity with the approved guidelines for macroeconomic and fiscal policy. The aforementioned requirements will be the basis for the 2015 state budget.

It is of great importance to pay special attention to the Action Plans for Chapters 23 and 24 during the budget drafting and to provide the funds needed for implementation of envisaged measures.

At the aggregate level, throughout the period between 2013-2018, the implementation cost of the Action Plans amount to around 47 million Euros. In addition to this sum, there are costs of construction of infrastructure facilities. These costs for the period 2013-2018 come to more than 36 million, of which over 70% are donations.

Action Plans should serve as an essential indicator for planning next year’s budget. In particular, it is necessary to bear in mind that timely publication of decisions on revision of deadlines for implementation of certain measures, whose realization is behind the schedule, is crucial for proper budget planning. 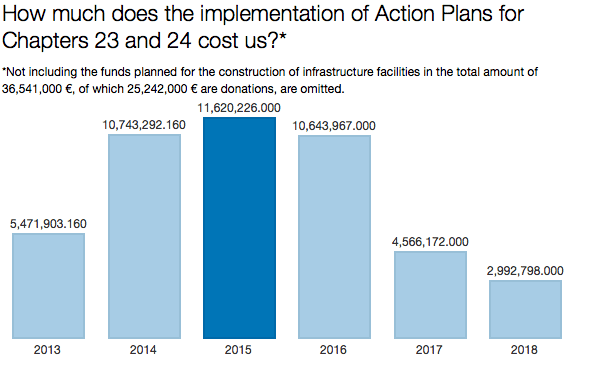