Skip to content
Institute Alternative » Publications » Parliament of Montenegro and the process of European integration – Just watching or taking part? 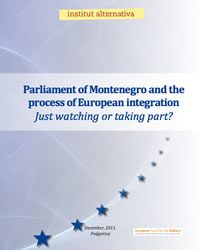 After it acquired the status of a candidate for membership in the European Union on 17 December 2010, Montenegro officially began the process of fulfilling the preconditions for the next phase of integration into this supranational body – the accession negotiations. However, in its Opinion on Montenegro’s membership application, the European Commission made the beginning of accession talks conditional upon progress in sever priority areas which require extensive harmonisation with membership criteria. The first concerned the Parliament, and, in addition to the adoption of new electoral legislation, it asked for the strengthening of oversight and legislative roles of the Parliament of Montenegro.

Taking from the thus identified need to strengthen Montenegro’s legislative body for the process of European integrations, this study first summarises the general role of the Parliament in the pre-accession phase, as well as in the period after formal accession to European Union. The introductory section also analyses the role and capacities of the Parliament’s working body which is currently in charge of European integrations – Committee for International Relations and International Relations, as well as those of the National Council for European Integrations. The analysis provides an overview of their work to date, including membership, capacities, competencies, and cooperation with the civil society. Focusing on these aspects of their work, and offering an account of their activities so far, as well as insights into practice of similar bodies in other countries of the region and in European Union, we will outline the possible solutions and alternative institutional arrangements, bearing in mind the Montenegrin context, demands of the European integration process, as well as the exigencies of financial and administrative effectiveness. The goal of the study is to offer a snapshot of the current capacities and responsibilities of the parliamentary bodies which are to play a role in the accession process, and to outline solutions grounded in comparative practice that could contribute to an improved position of these bodies.

In the course of our research we conducted interviews with the representatives of the Parliament, as well as with the State Secretary for European Integrations in the Government of Montenegro. Their opinions were extremely valuable in helping us to identify the current position and capacities of the Parliament and its bodies in the process of Montenegro’s integration into EU. As the study also took into account the future role of the National Council for European Integrations, we also interviewed its members who are not representatives of the Parliament. We also sent a number of requests for access to information to the Office of the Secretary General of the Parliament, which provided the basis for the overview of the functioning of these two bodies. The final section offers recommendations for each of the areas analysed in this report.