Skip to content
Institute Alternative » Blog » Our administration or the non-merit based rule? 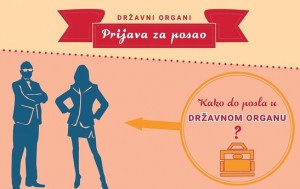 In late April, the Institute Alternative (IA) has launched a new internet website. Symbolically, we have named it “My Administration”, to remind people that the government and state authorities are here because of us, and not because of them, i.e. administration itself, which often, encapsulated into the bureaucratic practices, transforms itself into a self-contained apparatus for harvesting the fruits of power.

We have recently witnessed a warning of the Prime Minister that those irresponsible in the state administration will be punished. The latter, however, with the exception of magic submissions of “resignations at personal request”, has practically never happened. What is more troubling, however, is that we are just silent witnesses of the events around us and within our administration, to which we pay taxes and fees for public services, disproportionate to their actual quality… While laud advocates of superficial development directions of our country are gathering at congresses, which are marked by deficit of women and established vision.

And by lack of choice.

The defining feature of non-democratic systems around the world is precisely an illusion of choice and its very simple mathematics, comprised, for example, in the election of 153 national representatives out of 153 candidates. This is how our ruling party has elected their leader, the only one who dared to run for president.

In most cases, unfortunately, this is how our state employees are being appointed too.

The IA’s findings have shown that very little has been done to establish a merit based system in our state administration, precisely because the main problem of our society – a lack of competition – reflects on this sector too.

This systemic ailment has deflated the Law on Civil Servants and State Employees, which was expected to sow the seeds of depoliticisation and professionalisation, two multifaceted concepts which compress everything that Montenegrin administration should strive for.

The Law promised a reduced discretion in recruitment of state administration staff, by confining a ranking list from which the head of authority can appoint a civil servant to a total of five candidates.Yet, we now know is that the ranking list only occasionally consists of five candidates, or four, or three. More often, it has only one candidate. Just as in the case of election of the president of our ruling party or, once upon a time, in the case of election of the delegates into the bodies of self-governing organizations and the assemblies of socio-political organizations in former Yugoslavia.

Even when our administration is injected competitiveness, the top – ranked candidates are those who suffer. The IA’s findings point to the dissatisfaction of the candidates who, although given the best score during the testing procedures, are not being appointed because of subjective reasons, which are difficult to verify since they often refer to the level of motivation or communication skills. Sometimes, the prevailing reasons for choosing another candidate directly contradict with principles of meritocracy, or, literally, of “the rule based on merit”.

As such, meritocracy is maybe utopia, which, if maintained in its fullness, as one British sociologist suggested, could have a negative, frustrating effect on those less capable or less smart in a society. However, that still does not mean that a system based on merit should not be a principle to be pursued.

It is encouraging, though, that, from time to time, a handful of courageous contacts us. They do it either directly through our new website or by using less modern messengers: telephone, electronic mail, or sometimes, over the first morning coffee, they tell us about the injustice they suffered while trying to achieve one of their basic human rights – the right to work. The fact that they have chosen the state administration does not make them lonely in a country where a majority of citizens, according to a survey, would rather have “a government job” for a salary of 450 euro than a private sector job for a salary of 750 euro. On the other hand, the fact that employment in state authorities is very often “a contest without contestants”, despite the attractiveness of the government job, should be “a wake-up call” for policy makers and representatives of the international community, and society itself, which often, due to the prevailing apathy, “reconciles with destiny”.