It was necessary to consult the Parliament prior to drafting an Action Plan which aims to address key recommendations from the European Commission’s Report. The need for a comprehensive amendment of the Law on Prevention of Corruption goes beyond the scope of electoral reform.

This was pointed out today by Ana Đurnić, who on behalf of Institute Alternative (IA) participated in a joint session of the Committee on Political System, Judiciary and Administration and the Anti-Corruption Committee, which focused on meeting the political criteria for EU membership, in areas of judicial reform and the fight against corruption. 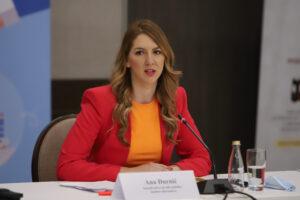 ‘’We have previously pointed out that, although the Government must bear the Action Plan for addressing key recommendations of the European Commission, there is a need for a broader political, institutional and social consensus about this document’’, she said, stressing that not all of the participants of the meeting had access to that document.

She added that the resolution of the problematic situation in judiciary and prosecution is directly related to the Parliament, which is why the MPs must have been involved in preparing the document aimed at addressing the recommendations of the European Commission.

Đurnić emphasized that the much-needed amendments to the Law on Prevention of Corruption are artificially related to the reform of the electoral legislation, and that in terms of their scope and priorities, these amendments exceed the electoral reforms.

‘’The focus in further reforms and the work of the Agency for the Prevention of Corruption must be put on more adequate sanctioning of violations of the provisions of the Law, especially regarding income and property registration and conflict of interest”, she said and explained that these sanctions are currently not deterrent enough.

‘’Public procurement is an issue that has been largely neglected over the past year, due to the general positive assessments of the Law on Public Procurement and the eProcurement system. However, more important is the decision of the European Commission to place procurement in the cluster Fundamentals of the new Methodology, with chapters 23 and 24”, emphasized Đurnić and explained that this should be interpreted as the European Commission’s clear message that public procurement is an important anti-corruption issue, rather than merely a market issue.

A recording of the session is available bellow: