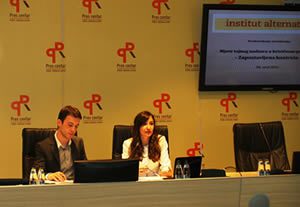 This research is supported by the Parliament of Montenegro, through its Committee for the distribution of funds to NGOs.

It represents the second part of the project entitled Democratic and Civilian Control of the Application of Secret Surveillance Measures in Montenegrin Legislation and Practice – Possibilities and Limitations.

Most important findings of the analysis:

– Legal framework for the application of secret surveillance measures (SSM) in criminal procedure, through the new Criminal Procedure Code, has been mostly aligned with the case-law of the European Court of Human Rights (ECtHR). Insight into call lists, not defined as an SSM in Montenegrin legislation but rather as an operative data-gathering and police authority during investigation, is not in line with the case-law of the ECtHR.

– Absence of practice of determining responsibility for illegal procedures, administrative and procedural shortcomings in the application of SSM, is a cause of concern. By enhancing communication and coordination between the Police Directorate and the National Security Agency, the number of individuals kept under SSM twice, should be reduced to a minimum.

– Although all levels of control have certain mechanisms of oversight of the SSM application at their disposal, they are all characterized by passivity in exercising their duties prescribed by law. Internal control is not performing its oversight duty, allegedly because the data are secret. Judicial inspectorates do not control prescribed record-keeping of SSM. Committee for political system, judiciary and administration, and the Committee for Security and Defense did not use their control mechanisms for overseeing the application of SSM in criminal procedure. Complaints mechanism is not developed, while the Ombudsman did not perform any controls of the application of SSM in criminal procedure.

– Availability of information is very limited, and the annual performance reports of the state institutions competent for applying the measures do not include information on SSM. In the last report submitted by the Tripartite Committee, responsible for gathering data in the field of corruption and organized crime, it is stated that ‘during 2011, SSM were approved for 113 individuals in 18 cases.’ However, the number of individuals processed and the number of legally enforced decisions based partly on the evidence gathered through the application of SSM, which would indicate the results achieved through this method, is not available.

– It is necessary to regulate the legal framework for insight into call lists more precisely; to allow the Internal Police Control to exercise continuous oversight of the application of SSM in criminal procedure; courts, prosecutorial authorities and the police should deliver special reports on the application of these measures to the Committee for Security and Defense.