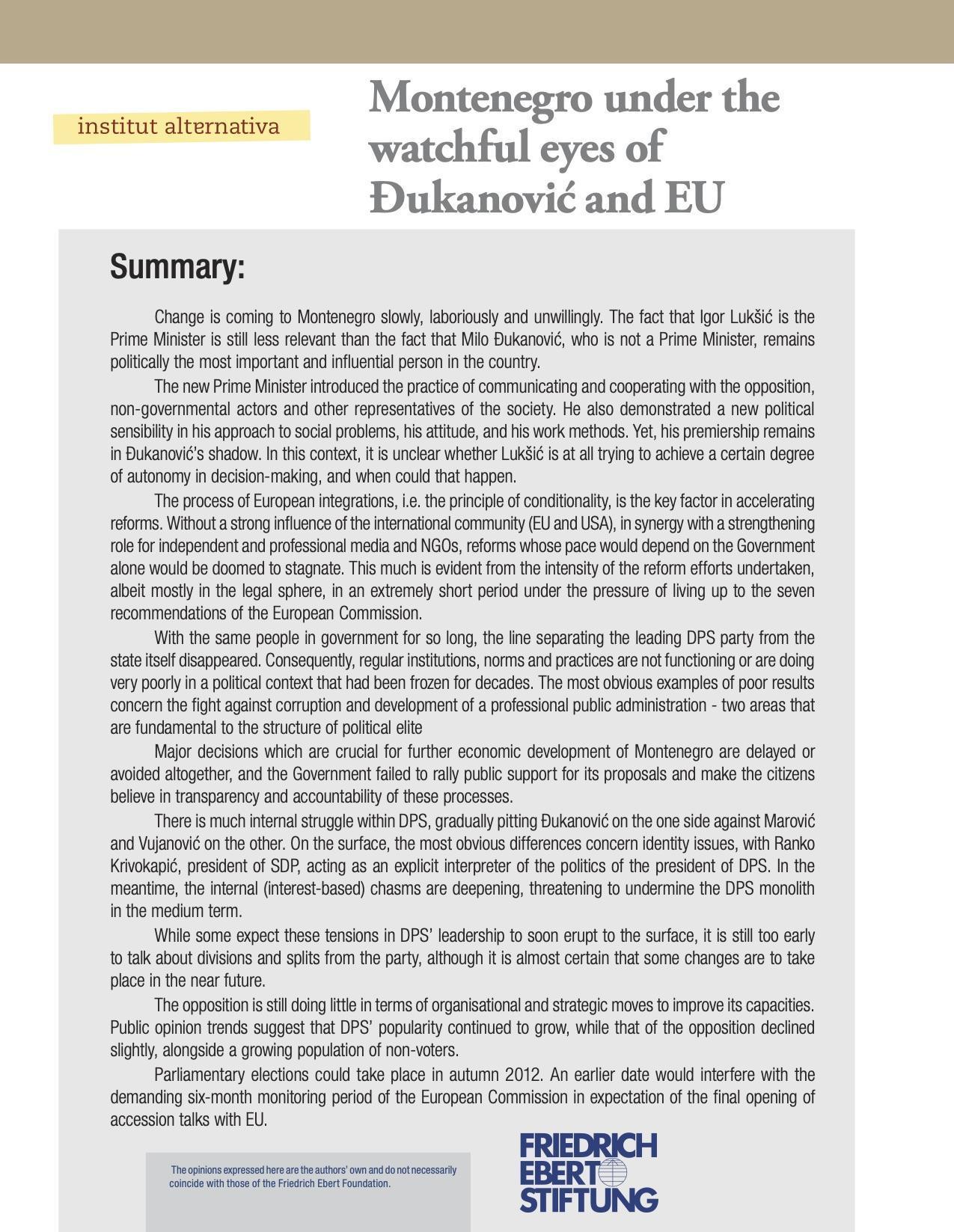 Change is coming to Montenegro slowly, laboriously and unwillingly. The fact that Igor Lukšić is the Prime Minister is still less relevant than the fact that Milo Đukanović, who is not a Prime Minister, remains politically the most important and influential person in the country.

The new Prime Minister introduced the practice of communicating and cooperating with the opposition, non-governmental actors and other representatives of the society. He also demonstrated a new political sensibility in his approach to social problems, his attitude, and his work methods. Yet, his premiership remains in Đukanović’s shadow. In this context, it is unclear whether Lukšić is at all trying to achieve a certain degree of autonomy in decision-making, and when could that happen.

The process of European integrations, i.e. the principle of conditionality, is the key factor in accelerating reforms.

Without a strong influence of the international community (EU and USA), in synergy with a strengthening role for independent and professional media and NGOs, reforms whose pace would depend on the Government alone would be doomed to stagnate. This much is evident from the intensity of the reform efforts undertaken, albeit mostly in the legal sphere, in an extremely short period under the pressure of living up to the seven recommendations of the European Commission.

With the same people in government for so long, the line separating the leading DPS party from the state itself disappeared. Consequently, regular institutions, norms and practices are not functioning or are doing very poorly in a political context that had been frozen for decades. The most obvious examples of poor results concern the fight against corruption and development of a professional public administration – two areas that are fundamental to the structure of political elite

Major decisions which are crucial for further economic development of Montenegro are delayed or avoided altogether, and the Government failed to rally public support for its proposals and make the citizens believe in transparency and accountability of these processes.

There is much internal struggle within DPS, gradually pitting Đukanović on the one side against Marović and Vujanović on the other. On the surface, the most obvious differences concern identity issues, with Ranko Krivokapić, president of SDP, acting as an explicit interpreter of the politics of the president of DPS. In the meantime, the internal (interest-based) chasms are deepening, threatening to undermine the DPS monolith in the medium term.

While some expect these tensions in DPS’ leadership to soon erupt to the surface, it is still too early to talk about divisions and splits from the party, although it is almost certain that some changes are to take place in the near future.

The opposition is still doing little in terms of organisational and strategic moves to improve its capacities. Public opinion trends suggest that DPS’ popularity continued to grow, while that of the opposition declined slightly, alongside a growing population of non-voters.

Parliamentary elections could take place in autumn 2012. An earlier date would interfere with the demanding six-month monitoring period of the European Commission in expectation of the final opening of accession talks with EU.