Montenegro is far from the frontrunner in the region based on the overall score in public administration reform (PAR) and comes next to last, based on the regional WeBER monitoring, said Stevo Muk, President of the Managing Board of Institute Alternative (IA). 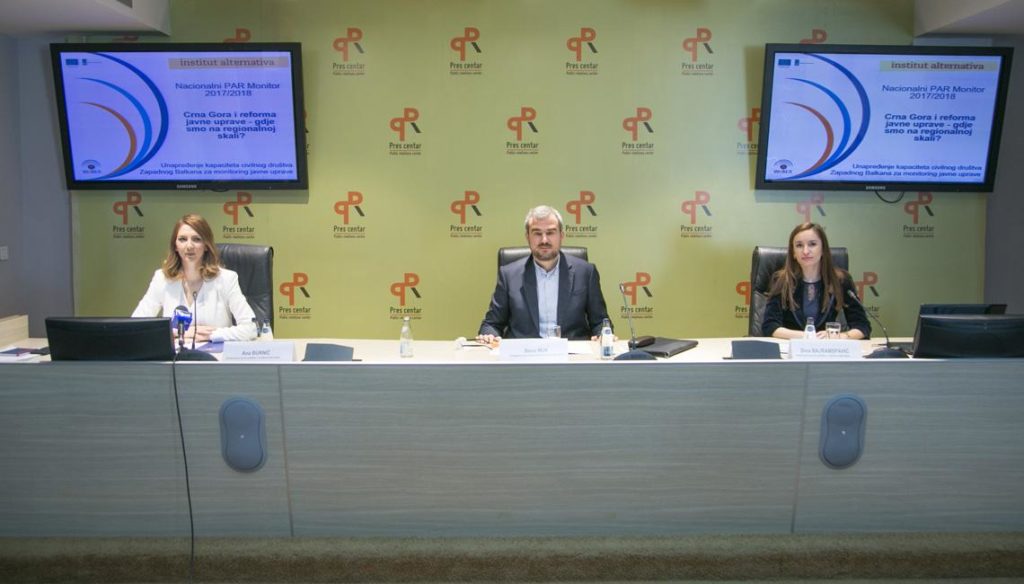 In the Policy Development and Coordination area, Montenegro fares next to last, mostly due to the lack of information on the work of Government’s working commissions, as well as the practice of complete omission of information classified by the degree of secrecy from the agenda of the Government’s sessions. NGOs in Montenegro are the most dissatisfied in the region with the procedures, legal framework and practice for conducting public debates, as well as with the treatment of their comments and suggestions within the Government’s working groups.

In the Public Service and Human Resource Management area, key problems refer to accessibility of information on the civil service system, lack of the legally prescribed maximum percentage of temporary engagements and disproportionate burden for job applicants in public administration. The civil service remuneration system is not precisely regulated. The structure of the supplements to the basic salary, which could highly affect the final amount of the civil servants’ earnings, is too complicated, while its limits and procedures for awarding them are not always clear enough. This has contributed to the poor ranking of Montenegro in this area.

In the Accountability area, Montenegrin civil society is the most dissatisfied with how the exceptions to the presumption of the public character of information, which were further widened in the latest amendment to the Law, are defined and implemented, as well as with the poor implementation of the rules for proactive publishing. According to the perceptions of the civil society, NGOs in Montenegro most often face violation of legal deadlines for obtaining information and the access to information is the most costly in the region. Agency for Personal Data Protection and Free Access to Information ranked worst, compared to its counterparts in the region.

In the Service Delivery area, Montenegro again comes next to last for poor results on the perception of availability and accessibility of public services. In the region, only citizens of Bosnia and Herzegovina have worst opinion than Montenegrin citizens when it comes to increasing time for obtaining administrative services in the past two years. Only 31% of citizens are aware that public administration offers electronic services, and out of the five percent of respondents claiming to use them, only 34% claimed they had managed to successfully obtain required service

Montenegro fared worst in the Public Finance Management area. Key issues refer to the lack of the budget execution reports, financial performance data and non-existence of the official budget for citizens at the national level. In all the other countries in the region, more data is available on the work of the internal audit, compared to Montenegro, while the work of the State Audit Institution is criticised for poor cooperation with the civil society, as well as for the content and structure of the audit reports.

Research was conducted from September 2017 to September 2018 in those aspects of public administration that citizens are mostly connected with, as well as those the most important for the work of civil society, and refers to the availability and accessibility of information and inclusion of citizens in decision-making.

The research is part of the regional three-year project “Western Balkans Enabling Project for Civil Society Monitoring of Public Administration Reform (WeBER)”, funded by the European Union and co-funded by the Kingdom of Netherlands.

The overall goal of WeBER is to increase the relevance, participation and capacity of civil society organisations and media in the Western Balkans to advocate for and influence the design and implementation of public administration reform.