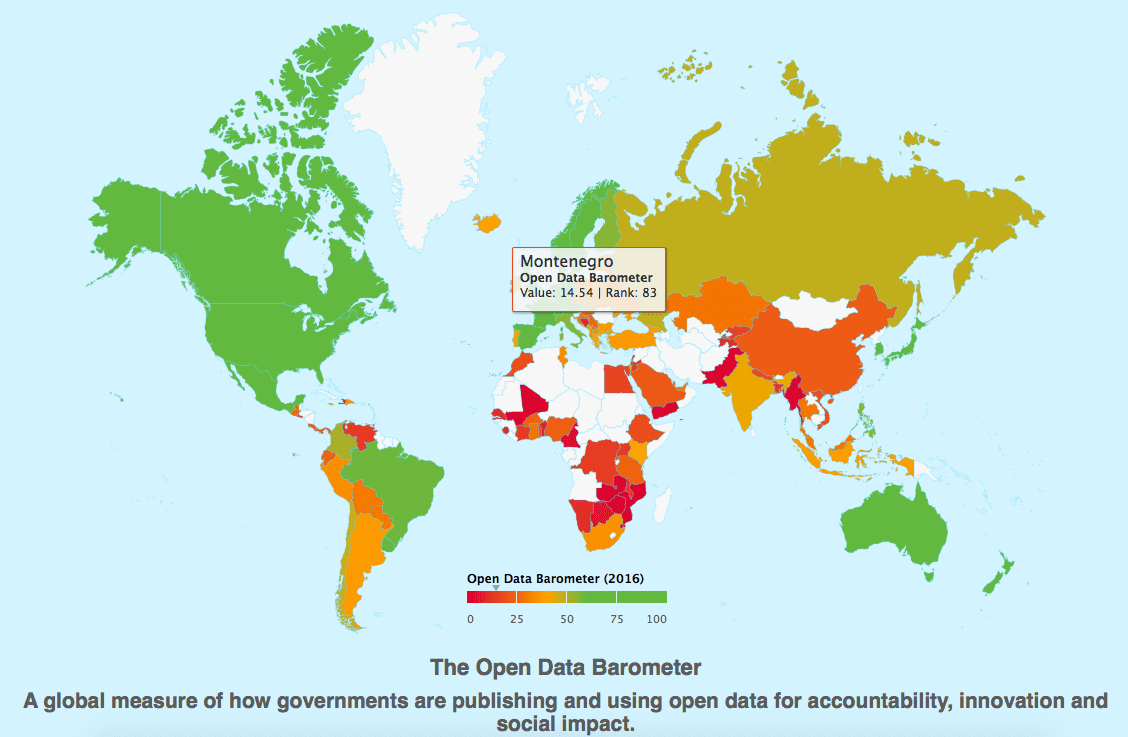 With its poor results in the field of transparency of public data and the use of new technologies in the transparency of its administration, Montenegro ranks among the three last countries in Europe as 83rd on the list of 115 countries.

Montenegro has been included in the global measurement of public data openness, Open Data Barometer, for the first time. Montenegro is ranked as 83rd of the 115 countries surveyed, with 15 of possible 100 points in the questionnaire. Only Bosnia and Herzegovina (100th position) has been ranked lower in the region, while Serbia (65), Kosovo (63), Croatia (58), Albania (50) and Macedonia (48) have been ranked better. At the top of the list are United Kingdom, Canada and France, while Swaziland, Myanmar and Yemen are at the bottom.

The Barometer ranks 115 countries on: Readiness for open data initiatives, implementation of open data programmes, impact that open data is having on business, politics and civil society. Through a series of questions, the degree of availability of data in open budget, public procurement, health and education sectors, criminal statistics, etc, have been examined.

Institut alternativa’s experts have conducted research for Montenegro within this year’s Open Data Barometer. Institut has, for years, advocated for the opening of public data in Montenegro, through visualization of budget data at the portals www.mojnovac.me and www.mojgrad.me, concrete initiatives to the state authorities to share their databases with the public, as well as through monitoring of the transposition of the EU directives on the re-use of data to national legislation.

The Parliament of Montenegro has recently adopted amendments to the Law on Free Access to Information, which, among else, regulate re-use of public data. In other words, the obligation of public authorities to produce, publish and deliver information in a machine-readable format was introduced.

The law contains a number of shortcomings, which IA has emphasized during the public debate, and which were not corrected in the final version. These shortcomings are the introduction of strict restrictions on access to information, its use, and the basis for rejecting requests for reuse, the costs of the procedure for re-use of information, etc.

Regardless of the aforementioned shortcomings, it is important that the new provisions are used. Meaning, that citizens and civil society are aware of their right to access data produced by the authorities in the format in which they were created, which is not “locked” and in which data can be used – managed, searched, analysed and compared.

The law introduced the obligation not only to share the data with public, but also to produce new and digitize existing databases, as well as to create an open data portal by May 2018, as the central address for accessing government databases.

In order to improve the results of Montenegro in this global survey, a fundamentally different attitude of the Government towards open data is needed, accompanied by the public pressure on the administration and the intensive use of the right to access public data in open formats.

On the following link you can find a summary of the key findings of global research, as well as the overall results and the methodology. This is the fourth edition of the Open Data Barometer, which is run by the World Wide Web Foundation in 115 countries around the world, an organization founded by Tim Berners Lee, inventor of the World Wide Web.