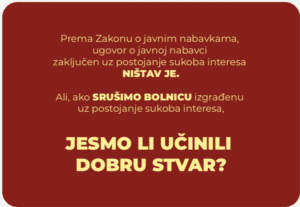 Montenegrin Public Procurement Law requires the contracting authorities to sign conflict of interest declarations ahead of a public procurement procedure, or during a procedure, should conflict of interest occur. One of the shortcomings of our system is that the contracting authority keeps the records and is oblige to verify the conflict of interest declarations and act accordingly, although it has no (automated) access to the registries and databases that would be of assistance (Tax Administration, database of asset records of public officials, The Central Register of Commercial Entities, the Central Population Registry).

The shortcoming of our system is that inspection supervision refers solely in terms of verification of compliance with the statutory obligations related to recording instances of conflict of interest and excluding relevant bidders from the procedure.

In order to improve the system of conflict of interest in public procurement through preventive action, we can use the models of the countries in European Union (Romania and Croatia) and the Western Balkans (Bosnia and Herzegovina and North Macedonia).

How to act preventively?

Croatian model contains numerous mechanisms in particular in terms of enhanced transparency of declarations and other mechanisms aimed at conflict-of-interest prevention. This primarily refers to the obligations of publishing the declaration of (no) conflict of interest of all the persons involved in the public procurement procedure in the Electronic Public Procurement Journal, and of drafting, publishing and regularly updating the lists of economic operators that heads of contracting authorities are not allowed to conclude contracts with due to the presence of certain private interests; besides Croatia, these exist also in Bosnia and Herzegovina. 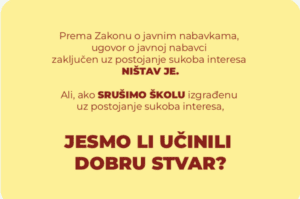 For the conflict-of-interest prevention measures not to lead to excessive exclusion of economic operators from public procurement procedures, the model of North Macedonia deserves to be considered, in terms of defining the acceptable percentage of the value of public procurement contracts with the bidder in whom a person from the contracting authority has some private interest. The percentage would have to be proportionate to the total Montenegrin public procurement budget, but it would also have to be specially adjusted to various specific types of contracting authorities, including those with smaller procurement budgets. Development of an IT solution that would facilitate detection of potential (apparent) conflict of interest and prevention of its occurrence, following the PREVENT model from Romania, should also be considered.

This model largely relies on databases and the level to which they are linked (The Central Register of Commercial Entities, the Central Population Registry, database of asset records of public officials…).

Continuity of operation and collection of large quantities of data over a longer period of time are of significance for the operation of these controls. That enables identification of “patterns” in behaviour, monitoring of developments and changes in ownership structure of bidders and of any developments related to the contracting authorities and their heads changing their positions. 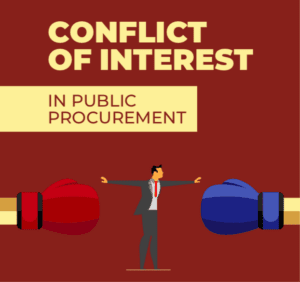 Even though Montenegro does not have an umbrella institution responsible for identification of conflict of interest in public procurement, running a registry and recording conflict of interest and actions taken,  there are technical preconditions for setting up such a system of control (PREVENT).

Through the cooperation between the Agency for the Prevention of Corruption and the Ministry of Finance and Social Welfare, which runs the Electronic Public Procurement Journal, and with involvement of other public procurement system actors and with consent of the decision-makers and political entities represented in the Parliament, with amendments to the legal framework and provision of technical preconditions and resources, such a system could come to life in Montenegro.

The mentioned models are explained in more detail in the analysis “Conflict of Interest in Public Procurement”.

Participants of the conference “Fight against corruption and prevention of conflict of interest in public procurement” organised by Institute alternative, had opportunity to hear experiences of these countries and how these models work in practice. It was concluded at the conference that the system of prevention can be improved through preventive and repressive system. It is necessary to network the system, not to put all pressure on one institution and in order for the public to have a controlling role it is necessary to improve transparency. 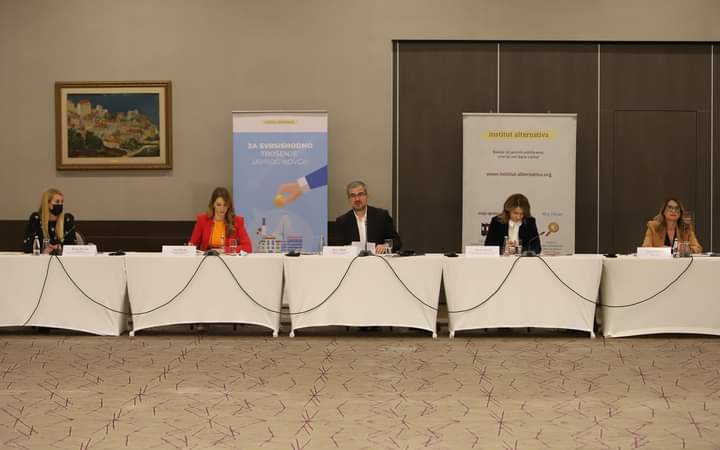 The text was prepared within the project “For the Better Use of Public Money!”, implemented by the Institute Alternative with the financial support of the Embassy of the Kingdom of the Netherlands. The opinions and views expressed in this text do not necessarily reflect those of the Embassy.