The Coalition for Transparency and Fight against Corruption at the Local Level (KUM) supports the efforts of non-governmental activists and citizens of Ulcinj to protect the Pine forest area and urges the Ulcinj local authorities to respect the voice of its citizens, but also to act responsibly towards the resources of this municipality.

We recall that the citizens of Ulcinj did not have timely information on plans and attempts to repurpose the area of ​​the Pine forest by the municipality of Ulcinj. Spatial-urban development plans (SUDP) of Ulcinj, through non-transparent process, intended this area for tourism and drafted Detailed urban development plan (DUDP), but it received negative opinion from the Audit Committee (12/06/2019). Consequently, it was not adopted by the local parliament within the legal deadline. Also, during almost nine years of working on the SUDP and two public debates, the Pine Forest was not mentioned, but other areas such as Velika plaza, Salina, Ada Bojana, Valdanos, Sas and Liman/Maslinjak were in focus. Although the valorisation of the Pine Forest was envisaged, it was not clear to what extent it would develop, except the part related to the construction of the new Hotel Galeb (on the site of the old hotel), which was supported by the citizens because that hotel used to represent one of the symbols of tourism. 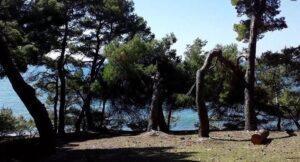 In April this year, one person from the region was building a “restaurant” in the only widening of the Pine forest, and another one even entered with a dredge as he claimed to “clean his property”. The response of the citizens of Ulcinj to this was organization of the protest with request for the municipal authorities to put permanent moratorium on the entire area of the Pine Forest. Protests were held on 7 and 23 May 2019, next to the Ulcinj Municipality building, and citizens on that occasion submitted a request to initiate the formal protection of the Pine Forest. Unfortunately, the municipal authorities did not even respond to their own citizens. Dissatisfaction of citizens, as well as non-governmental organizations, has become actualized after publication of the information that the Government of Montenegro has made the Decision on drawing up DUDP of “Pinjes – Pine Forest”, as well as the Decision on drawing up the DUDP of “High class hotels and villas “, also on Pinjes. It was a sign that the municipality of Ulcinj, contrary to the expressed attitude of citizens and the public interest, requested the Ministry of Sustainable Development and Tourism re-drafting of the Pine forest DUDP. The citizens of Ulcinj continued to express their dissatisfaction through social media, which was intensified upon the release of information that an agreement on ceding the land (8000m2) had been reached between the Government and the Municipality of Ulcinj for unblocking of municipal account. Then the new protest was initiated in front of the municipality and the request, signed by 300 citizens, was submitted through the municipal archive to protect the Pine forest. The municipality responded by publishing an unsigned press statement and attempt to discredit the prominent activist, Zenepa Lika. The attack was factually unfounded, which our colleague Lika proved, but it indicated that the civil protest had surprised and appears that, only for a while, scared the Ulcinj authorities. As a reminder, the municipality forbade citizens who protested to connect sound system in the municipal building, which these same citizens pay.

The Coalition KUM expresses concern over the fact that municipal authorities in Ulcinj persist in completing this process, despite clearly expressed citizens’ opposition, as indicated by today’s statement of the President of the Municipality, who announced upcoming payment of funds to the Municipality of Ulcinj by the Government, and for which the Municipality of Ulcinj will sacrifice even the Pine Forest – its only green area in the heart of the city and kind of “open treatment centre ” for the citizens of Ulcinj.

Local authorities should listen to the voice of their citizens and not grossly ignore citizens’ initiatives, especially not those that are aimed at protecting the resources of the municipality itself and which are in the public interest.

The Coalition was formed within the framework of the project “Let’s Put Corruption into Museum!” implemented by the CCE in cooperation with partners and with the support of the EU Delegation to Montenegro and the Ministry of Public Administration of the Government of Montenegro. The views expressed in this announcement are the sole responsibility of the Coalition KUM and do not necessarily reflect the views of the EU and the Ministry of Public Administration.