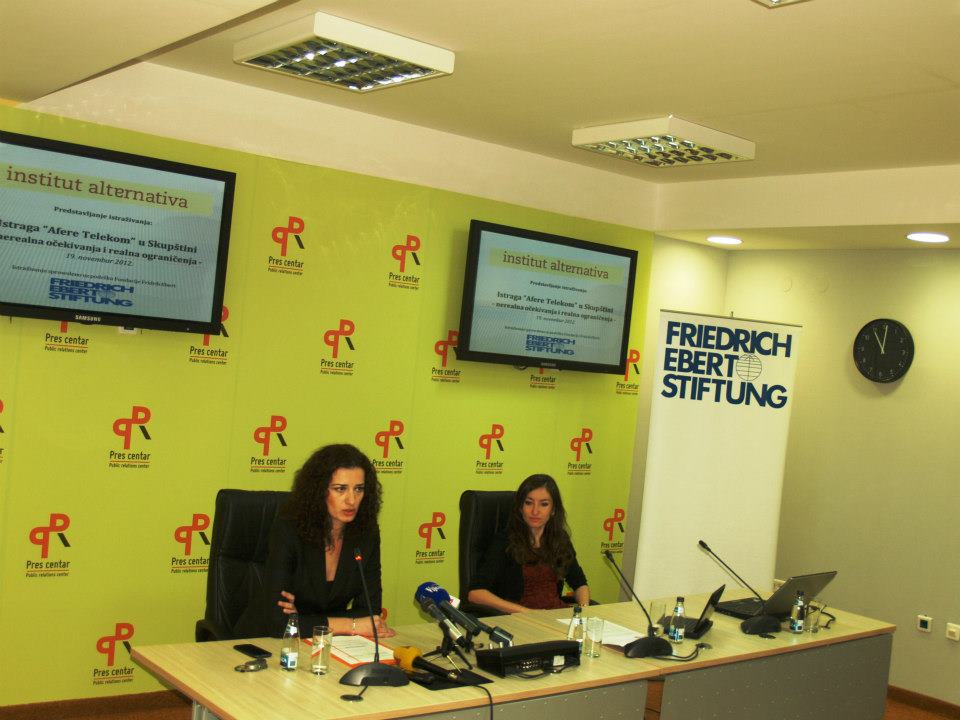 Today we presented the findings of our latest analysis, entitled “Investigating the “Telekom Affair” in the Parliament – unrealistic expectations and realistic limitations.” The analysis was supported by the Friedrich Ebert Stiftung (FES).

At the press conference speakers were Dina Bajramspahić, the author of analysis and Jovana Marovic, research coordinator in Institute Alternative.

Conclusions and recommendations from the analysis are presented in the remainder of the article:

Parliamentary inquiry is one of the most important control mechanisms that the Parliament has at its disposal when controlling the work of the government, state bodies and institutions. It is therefore necessary to continuously strengthen and enhance its internal mechanisms in order to allow it to objectively determine political accountability of state officials. That is, after all, in the interest of the government itself, because, in parallel with the strengthening of the Parliament’s control function, the quality of the government’s work and the principle of responsibility of its officials and servants will necessarily rise.

Because of that, the Parliament and the government must undertake a series of activities with an aim of enhancing the parliamentary inquiry.

1) As regards strengthening of competences:

It is necessary to add penal provisions for failure to respond to the invitation of the Inquiry Committee, failure to deliver information or false testifying.
By amending the Law on Parliamentary Inquiry, it is necessary to create a legal basis for summoning citizens to testify before the Inquiry Committee, and to allow for the delivery of information and documents from those citizens who are in possession of data which could shed light on the subject matter.
2) As regards enhancing procedures:

By amending the Law on Parliamentary Inquiry, it is necessary to:

enable proportional participation of the opposition in decision-making as regards taking statements, in order to ensure a minimal pass rate of the opposition proposals for summoning individuals.
prescribe as obligatory for the Chairman of the Inquiry Committee, in communication with the Committee members, to prepare a report to be discussed by the Inquiry Committee. Should there be no majority for the adoption of the report, a technical report will be adopted.
prescribe a technical procedure for conducting hearings, in a way that the Committee members would be allowed two rounds of question-asking, with a possibility of commenting on answers of the individuals summoned for a hearing.
3) As regards raising awareness about the legitimacy of parliamentary inquiry:

Both the Parliament and the Government, ruling majority and opposition, must promote the parliamentary inquiry, indicate the importance and significance of this control mechanism, and create environment in which the application of this control mechanism will be a constructive, democratic attempt to solve a social problem, on the basis of arguments and facts, and not a malicious attempt to decide on criminal responsibility outside the judicial proceeding.
4) As regards financial support to the work of Inquiry Committee:

It is necessary that a special programme dedicated to the improvement of the control function be incorporated into the budget of the Parliament of Montenegro, which would, inter alia, foresee expenses needed for the smooth work of inquiry committees.
5) As regards enhancing transparency:

All documents about the work of the Inquiry Committee (minutes, reports, decisions, statements given by summoned individuals) should be published on the Parliament’s website.
Bearing in mind the importance of parliamentary inquiry, the Parliament and the Government need to take a number of actions to improve it.

The analysis “Investigating the “Telekom Affair” in the Parliament – unrealistic expectations and realistic limitations” can be downloaded here.