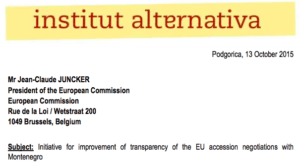 In an initiative submitted on 13 October 2015, Institute Alternative (IA) urged the European Commission to make its opinions on Montenegrin legislation, as well as peer review reports available to the public, and thus prevent the Government from manipulating the EU accession negotiations.

Institute Alternative submitted the letter addressed to Mr Jean-Claude Juncker, President of the European Commission, and to Mr Johannes Hahn, Commissioner for the Neighbourhood Policy & Enlargement Negotiations, and pointed out to significant limitations of transparency of Montenegrin accession negotiations. IA called upon the proactive approach of the European Union in making the process more open to the public.

From the beginning of accession negotiations, the Government used Commission’s opinions on draft legislation and associated strategic documents as the key argument for their adoption or lack of thereof. On the other hand, the Government simultaneously refused to make the EC’s documents available to MPs, CSOs and the general public.

Lack of availability of the EC’s opinions and reports casts doubt over the policy making process in Montenegro. The quality of legal and strategic documents is called into question since it is not possible to find out whether they were prepared and adopted in accordance with suggestions provided by the Commission.

“Being the only stakeholder possessing all the mentioned documents, the Government of Montenegro is in the position to select only positive assessments and present them to the public, while disregarding those which are not as favourable”, it is stated in the letter.

In this manner, the right to free access to information and the right to participation of non-state actors in the policy making process are being seriously restricted.

Transparency of the negotiation process is being even more compromised since important decisions on chapters 23 and 24 are being made behind closed doors. This is the result of an increasing role of the Rule of Law Council and the practice of concealing Council’s conclusions even from the members of working groups who report on implementation of action plans for the above-mentioned negotiating chapters.

Therefore, Institute Alternative finds it imperative that the Commission publishes its opinions and reports. These documents should be redacted where necessary, in order to ensure protection of personal data. Otherwise, the European Commission will continue to encourage the Government to be non-transparent towards its citizens, while the negotiation process will be slowed down furtherly.

Note: The letter addressed to the President of the European Commission and the Commissioner for the Neighbourhood Policy & Enlargement Negotiations can be found here in its entirety.

Related articles: “Negotiations between Montenegro and the EU: Data access for the privileged only”