Institute Alternative sent an initiative to the Government and the Official Gazette to allow free access to final (consolidated) texts of regulations for all citizens.

Citizens do not have free access to the official database of consolidated texts of regulations of the Official Gazette. According to the Law on publication of regulations and other documents, the electronic edition of the Official Gazette is free, but the section on access to the texts of consolidated legislation is commercialized and charged 180 Euros per year for a single license (according to the latest published information). Alongside Official Gazette, similar and advanced services are being offered by private companies at several times higher prices. 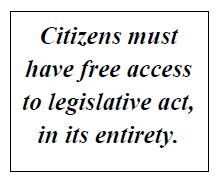 Edited text represents only text of legal regulation, currently in force. It contains the original text of the regulation and any changes that have been adopted from the date of its entry into force. Official Gazette in its free issues publishes the original text of the regulation but all subsequent modifications, additions, corrections are published only in the form of change of those provisions.

For example, The Local Government Act has been changed 11 times since coming into force in 2003 until today.

Citizen can access the text of Law currently in force, in two ways:

a) to pay 180 Euros to the Official Gazette or double that amount to other private companies in order to access edited text, or

b) find all 12 issues of Official Gazette (including the one where the Law was published for the first time) and compare all the changes and amendments, by him/herself till he or she reaches the final version.

Since the establishment of the register until the beginning of this year, Official 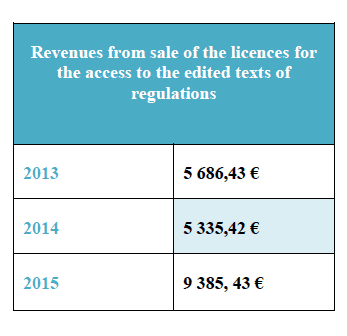 Gazette earned a total of 20 407.28 Euros. Revenues from the sale of licenses for access to the register of consolidated texts (Income from electronic subscriptions to Web regulations) for last year amounted to 9,385 Euros, which is 1.3% of the total revenue that this public institution collected (713 007.00). According to the report on the work of the institution, revenues are “largely” used to maintain the Legal Information System.

During the year 2015, almost the same amount was given by the Director of the institution to employees and retired employees on behalf of the 8th of March and on the Day of the Foundation of the Institution, which is the amount that is allocated to the Official Gazette each year for the programme ’’ Publications of regulations’’- 9 500 |€.

[1] By using taxpayers’ money, which is either paid directly from the state budget, or collected due to monopoly position of the Official Gazette, this institution commercialises access to edited texts of regulations. This practice must be stopped, and insignificant revenues are saying about the unsustainability of such a solution.