Milena Milošević, our public policy researcher spoke at the round table “The New Enlargement Strategy for the Western Balkans – How to Enhance Civil Society Role in Anti-Corruption and Good Governance”, organised by the SELDI Network on 28 November, in Podgorica. 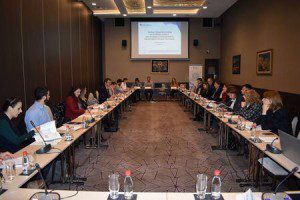 The Bulgarian and Austrian EU Council presidencies, as well as other initiatives, particularly Berlin Process and the upcoming new Enlargement Strategy, will put focus on the Western Balkans during next year. National governments will have to take ownership of their own integration process though demonstrating tangible results and concrete progress in both economic governance and anti-corruption.

Civil society has a key role to play in this process. Anti-corruption has to be addressed both comprehensively and horizontally with the increasing prioritisation of economic governance. This needs to be channelled through clear commitment on part of the Western Balkan countries and establishment of sustainable wide cooperation platform, involving decision-makers, CSOs, the business sector, as well as local, national and regional initiatives.

Public administration reform, as one of the three key pillars of the EU enlargement process, is particularly important area within which civil society, national and EU stakeholders should jointly work.

Milena presented Institute Alternative’s activities in monitoring of public administration reform in Montenegro and in the region, particularly within projects “WeBER” and “Civil Society for Good Governance: To Act and Account!”.

She emphasised the importance of networking of civil society and the media dealing with this reform from different perspectives, as well as importance of transparency of the EU negotiation process, so that NGOs can on an equal footing conduct an independent monitoring of public policies and progress in meeting certain criteria.

It was concluded at the event that it is necessary to prioritise the implementation of the independent evaluation, effective monitoring and assessment by CSOs. Western Balkan countries need to commit to establishing and promoting proper functioning of core institutions necessary for securing the rule of law. Prosecuting high-level corruption, fighting organized crime and corruption are hereby considered fundamental to countering the criminal infiltration of the political, legal and economic systems. The role of the public administration also needs to be highlighted, especially understood as impact-orientated, going beyond the current image of a formal technocratic process, alienated from the citizens.