Skip to content
Institute Alternative » Publications » How to enhance police integrity in Montenegro? 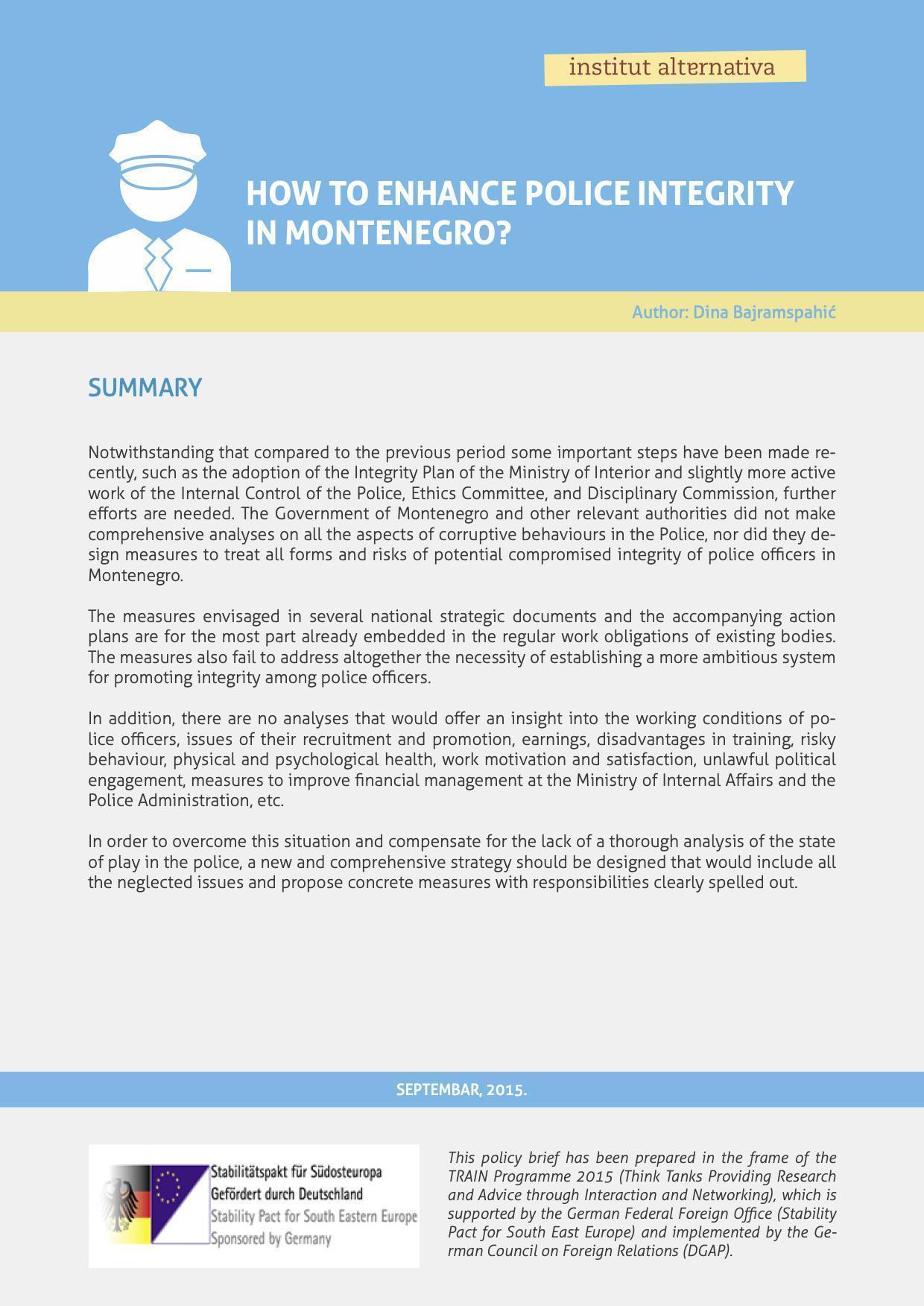 This policy brief is published in September 2015. It has been prepared in the frame of the TRAIN Programme 2015 (Think Tanks Providing Research and Advice through Interaction and Networking), which is supported by the German Federal Foreign Office (Stability Pact for South East Europe) and implemented by the German Council on Foreign Relations (DGAP).

Police corruption is an international problem. Historically speaking, police misconduct has been a factor in the development of police institutions worldwide, but it is a particular problem in countries affected by war or war surroundings. That is also the case in Montenegro, where the political system transition in the 1990s has led to the establishment of close links between police officers and organised crime groups, high level of politicisation of the Police, and a decline in professional standards. One security expert goes as far as saying that the mafia has always collaborated with the local police, either openly or in secret.

When Montenegro was still part of the post-1992 rump-Yugoslavia, it was the Montenegrin police force that served as the Podgorica government’s muscle. Its ranks increased from 5.000 in 1997 to 18.000 in 2000, while the Army of Montenegro, as part of the Yugoslav Army, was under Belgrade’s influence. This situation has had a negative impact on the professional standards of police conduct, among other things due to the lack of proper police education of newcomers. Today, with a little more than 4.000 police officers, it still has the greatest number of police officers per capita in Europe.

At the same time, the Police Administration (PA) is one of the key authorities responsible for performing the most challenging task of Montenegro’s European and Euro-Atlantic integration efforts, which is to establish rule of law in the country. But this can only be done if the PA makes progress in combating corruption within its own ranks and if it strengthens the system for the promotion of integrity and professional standards.

The remedies for the lack of integrity and professional standards in police behaviour suggested in this paper depend on a set of contextual conditions, including political, cultural, and economic ones. The paper offers an analysis of the existing police integrity framework set by the Government and measures taken by relevant institutions, primarily the Ministry of the Interior and the PA, used to encourage and reward professional conduct by the police officers as well as to sanction misconduct.

This paper’s objective is to contribute to improving the functioning of the Police force in Montenegro by assessing the Government’s activities in enhancing police integrity and by proposing a new strategic approach. It also promotes the creation of a comprehensive system for minimising the possibilities for corruption and all other forms of misconduct by the police officers.