Skip to content
Institute Alternative » Publications » Happy New Agency! – Establishment of the Agency for Prevention of Corruption in Montenegro 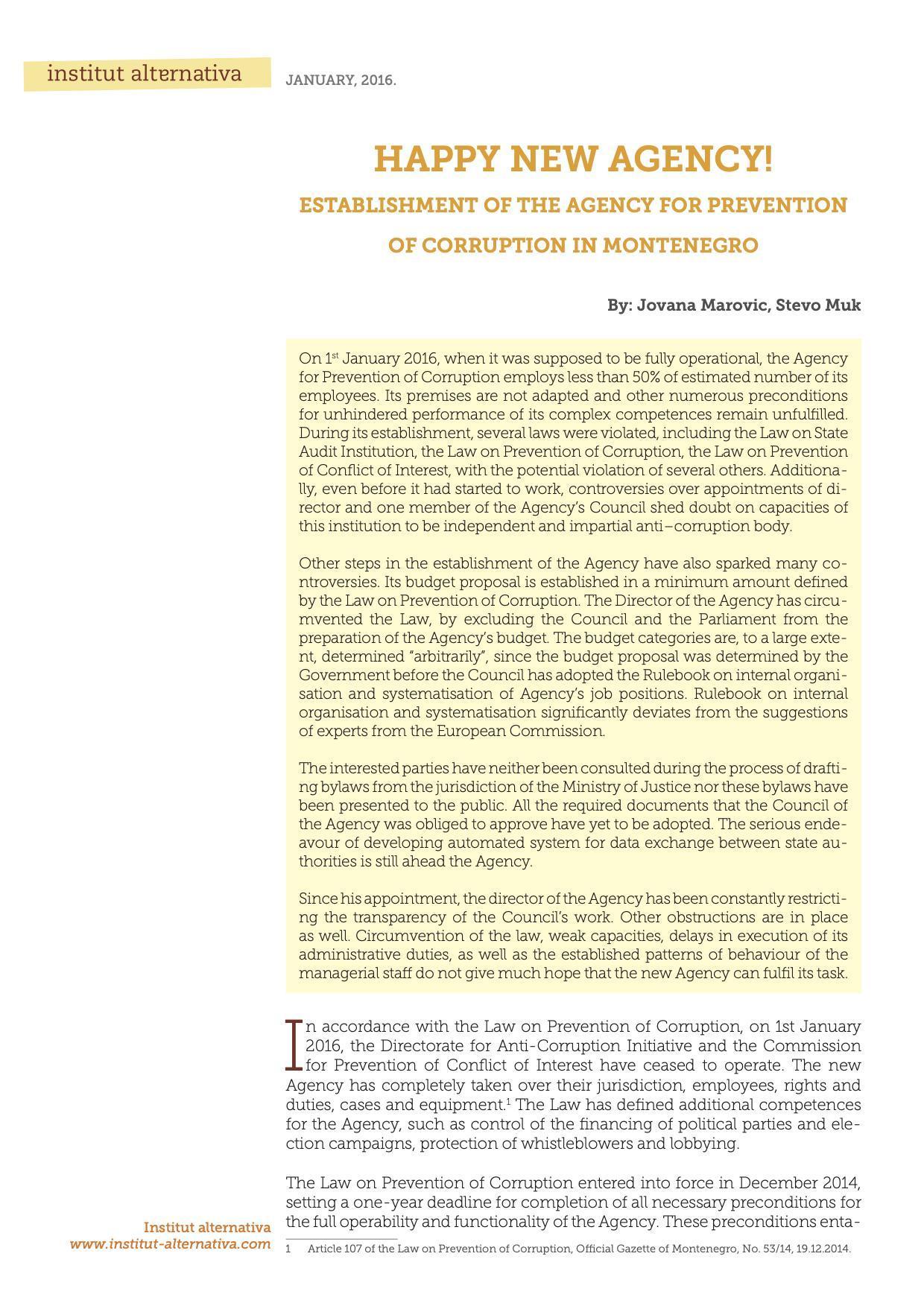 On 1st January 2016, when it was supposed to be fully operational, the Agency for Prevention of Corruption employs less than 50% of estimated number of its employees. Its premises are not adapted and other numerous preconditions for unhindered performance of its complex competences remain unfulfilled. During its establishment, several laws were violated, including the Law on State Audit Institution, the Law on Prevention of Corruption, the Law on Prevention of Conflict of Interest, with the potential violation of several others. Additionally, even before it had started to work, controversies over appointments of director and one member of the Agency’s Council shed doubt on capacities of this institution to be independent and impartial anti–corruption body.

Other steps in the establishment of the Agency have also sparked many controversies. Its budget proposal is established in a minimum amount defined by the Law on Prevention of Corruption. The Director of the Agency has circumvented the Law, by excluding the Council and the Parliament from the preparation of the Agency’s budget. The budget categories are, to a large extent, determined “arbitrarily”, since the budget proposal was determined by the Government before the Council has adopted the Rulebook on internal organisation and systematisation of Agency’s job positions. Rulebook on internal organisation and systematisation significantly deviates from the suggestions of experts from the European Commission.

The interested parties have neither been consulted during the process of drafting bylaws from the jurisdiction of the Ministry of Justice nor these bylaws have been presented to the public. All the required documents that the Council of the Agency was obliged to approve have yet to be adopted. The serious endeavour of developing automated system for data exchange between state authorities is still ahead the Agency.

Since his appointment, the director of the Agency has been constantly restricting the transparency of the Council’s work. Other obstructions are in place as well. Circumvention of the law, weak capacities, delays in execution of its administrative duties, as well as the established patterns of behaviour of the managerial staff do not give much hope that the new Agency can fulfil its task.